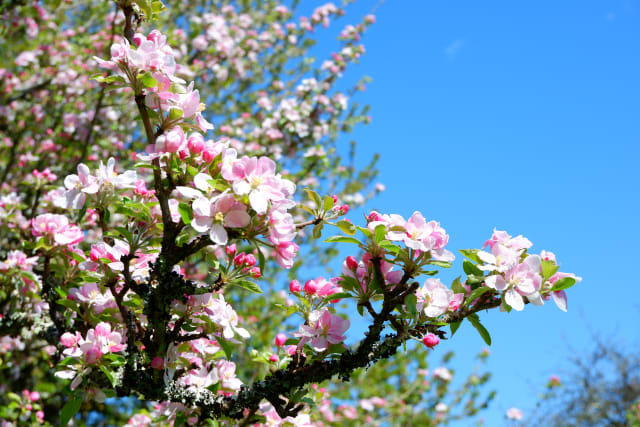 Weeks of sunshine have created a bumper year for apple blossom and boosted the chances of a good harvest, the National Trust has said.

A mild winter and last year’s warm summer combined with temperatures climbing to 24C during this spring’s flowering season, little rain and a record sunny April have helped the development of a heavy bloom for apple trees.

The warm conditions have led to bees being more active and the lack of strong winds allowed blossom to open for longer, so that more flowers could be pollinated.

The National Trust, which cares for more than 200 traditional apple orchards across England, Wales and Northern Ireland, and grows heritage varieties, said some of its sites had seen outstanding displays.

At Cotehele, in Cornwall, which has 10 acres of orchards and more than 125 varieties of apple tree including the Cornish Honeypinnick, Limberlimb, Pig’s Nose and Lemon Pippin, head gardener Dave Bouch said: “It has been an exceptional year for blossom this spring.

“Apples are biennial when it comes to cropping, so they will naturally have better years than others, and the crop is very dependent on rainfall over the coming months.

“That said, the scales are tipped towards a great crop this autumn.”

The warm conditions have also meant the apple blossom appeared early in many parts of the country, such as the 17th century orchard at Ardress in Northern Ireland where trees flowered two weeks ahead of schedule.

Tenant farmer Greg MacNeice who produces cider from the 5,000 trees on site said: “We have had the earliest blossom in a long time.

“Like elsewhere in the British Isles, we’re feeling the impacts of climate change, and these milder and wetter winters mean our spring growth in the apple trees also gets going earlier.”

Acorn Bank in Cumbria also saw blossom-heavy fruit trees hit their peak around two weeks sooner than usual, while warm conditions and a lack of frost at Oxburgh in Norfolk triggered early blossom.

In March, the National Trust launched #BlossomWatch to encourage people to take notice of blooming trees from their windows or in their gardens in the face of the lockdown, and to share their best images on social media.

The campaign has proved popular with thousands of images shared online, which could be down to a renewed appreciation of nature.

Nick Fraser, head gardener at Nunnington Hall in North Yorkshire: “We’re into the sixth week of lockdown now and people are craving nature.

“Perhaps one of the reasons why this year’s blossom seems so spectacular is that we’re all paying closer attention to it, we’re taking time to properly stop and look and reflect.”