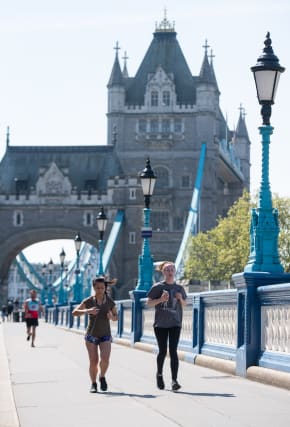 The founder of the Run for Heroes 5km challenge has received the Prime Minister’s daily Point of Light award.

Edinburgh-born Olivia Strong’s initiative has seen a million people run five kilometres, donate £5 and nominate five friends to do the same, raising more than £5 million for NHS charities in the process.

Boris Johnson said he has been “inspired by the ingenuity” of the challenge which has “roused a global movement that has collectively run the entire distance to the moon and back”.

The 27-year-old said she was on a run around Arthur’s Seat during lockdown when the fundraising idea came to her.

Her idea, which she initially hoped would raise £5,000, went viral on Instagram with participants from more than 20 countries taking part – including Olympian Sir Mo Farah, singer Ellie Goulding and football coach John Terry.

In a personal letter to Ms Strong, the Prime Minister said: “As we persevere with the restrictions to stay at home, protect our NHS and save lives, I have been inspired by the ingenuity of your Run for Heroes 5km challenge.

“Using your daily lockdown exercise to run 5K, donate £5 and nominate five people, you have raised more than £5 million to support the extraordinary work of our true heroes – the men and women of our unique NHS.

“With over a million participants from more than 20 countries, you have roused a global movement that has collectively run the entire distance to the moon and back.

“Thank-you for your brilliant initiative and for all that you have done to support our wonderful NHS.”

Ms Strong said: “It’s an absolute pleasure and delight to accept this award on behalf of the whole Run for Heroes community.

“Not only the amazing people who have helped with the campaign (India, Alice and my family), but everyone who has continued to run, donate and nominate. It’s been so wonderful to see people coming together for such a worthwhile cause.”

The Prime Minister’s daily Point of Light award was first launched in April 2014 to recognise outstanding individuals making a difference where they live, and Ms Strong is the 1,363rd person to be recognised.

She follows Captain Tom Moore, who after raising £30 million for the NHS by walking more than 100 laps of his garden was named the Point of Light winner on Thursday – his 100th birthday.