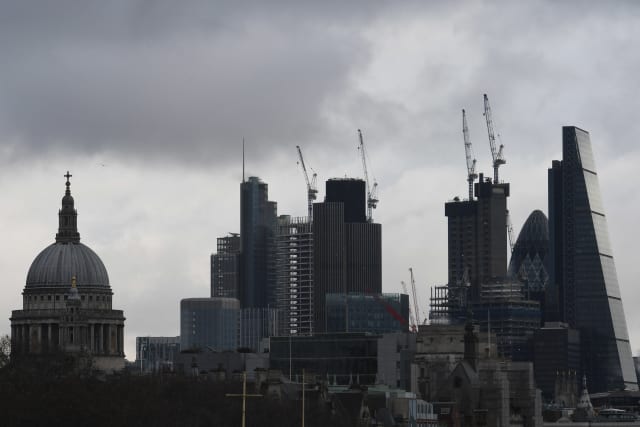 The London markets extended their losses as trading sentiment came under pressure after US President Donald Trump threatened China with tariffs.

European traders were shaken as the US leader blamed China for the coronavirus pandemic, after revealing soaring job losses in the US.

David Madden, market analyst at CMC Markets UK, said: “Many European equity markets were closed today as it is May Day, but the FTSE 100 came under pressure.

“During the week, the British index reached its highest level since early March, so the rising trade tensions acted as a good excuse to dump stocks.

“There has been a decent recovery in European equities since mid-to-late March, but now traders are worried we could be in for another round of the US-China trade spat.”

There was no movement in the German DAX and French Cac 40, as they were both closed for May Day holidays.

However, across the Atlantic, the Dow Jones slumped into the red after Mr Trump’s comments over China.

Meanwhile, the dollar was strengthened as the latest US manufacturing report for April came in ahead of forecasts, despite still showing a steep decline in activity.

Sterling dipped as the lockdown continues, although there is some optimism from analysts that the Government could make steps to ease restrictions in the next couple of weeks.

Travel and commodity firms led the fallers as multinational firms were heavily weighed by concerns over trade tensions.

In company news, Royal Bank of Scotland (RBS) moved higher despite revealing that profits halved as coronavirus shut down large parts of the global economy.

The bank said operating profit before tax reached £519 million in the opening quarter of 2020.

High street baker Greggs saw shares slide after it pulled back on plans to reopen its first sites to the public next week over fears it could attract crowds.

Last week, the high street bakery chain told staff it planned a phased reopening of stores, with 20 sites due to open from May 4 for takeaway and delivery as part of an initial trial.

Shares slipped 118p to 1,714p after it said the trial will now take place behind closed doors.

Elsewhere, British Airways owner IAG dipped after it signed agreements for one billion euros (£900 million) of loans backed by the Spanish government.

IAG said the money can be used to help its Spanish carriers Iberia and Vueling mitigate the economic impact of the coronavirus pandemic, but not to help BA after it announced 12,000 job cuts. Shares were 6.9p lower at 215p.

The price of oil drifted lower throughout the day as the US-China trade story chipped away at sentiment.