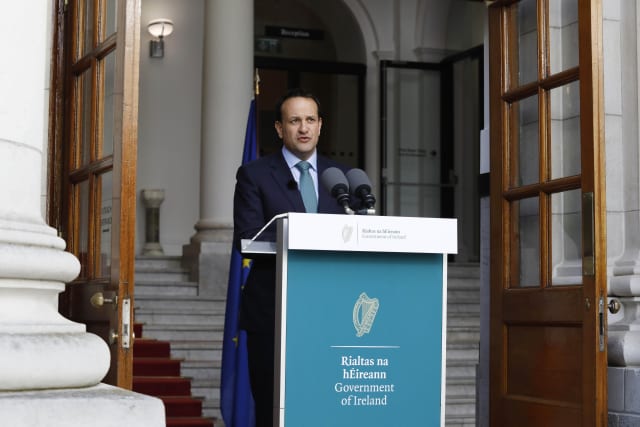 Ireland will begin its journey back to normality after a further two weeks of the current coronavirus restrictions, Leo Varadkar has announced.

The majority of the lockdown measures will remain in place until May 18, although two will ease in the coming days.

From next Tuesday, a travel limit that has forced people to stay within 2km of home when exercising will be extended to 5km and self-isolating over-70s will be advised they can leave home for a walk or drive.

The Taoiseach said in mid-May a phased easing of the remaining restrictions would begin.

“So on the 18th of May, Ireland begins to reopen and begins that journey to a new normal,” Mr Varadkar said in an address to the nation from Government Buildings in Dublin.

The Taoiseach said there would be five stages, three weeks apart, with the fifth phase commencing on August 10 if everything goes to plan.

He said schools and colleges will reopen in September/October at the start of the new academic year.

On May 18, outdoor work, like construction and landscaping, will resume.

Mr Varadkar said some outdoor sporting and fitness activities in small groups would also be allowed from that date.

He added: “Many regular health services will resume operating and it will be possible to meet small groups of friends and family outdoors.

“Not long from now, some summer night, we will see our friends again.

The plans were agreed by Cabinet after medical experts on the National Public Health Emergency Team (Nphet) provided advice to the Government earlier on Friday. The current lockdown period had been due to expire on Monday.

Mr Varadkar said there was a need for two more weeks of “tight restrictions” before the first of the five phases could commence.

Mr Varadkar said while thousands of lives had been saved “we have not yet won this fight”.

He added: “We need two more weeks of tight restrictions to weaken the virus further, so it doesn’t have the strength to make a comeback when we start to interact with each other once again.”

He said the last few weeks had transformed people’s lives “in so many different ways and ways that we could not have imagined”.

“I know it has been difficult – sometimes dispiriting,” he said.

“The frustration of having our lives restricted. The uncertainty about when things will get back to normal. The fear of the virus itself.

“As a nation our physical health has been attacked, our mental health eroded, our economy battered, and our society put to the ultimate test.

The total number of people who have died from Covid-19 in Ireland rose to 1,265 on Friday, after another 34 deaths were announced.

There have been 20,833 confirmed cases of the disease.

The Taoiseach said while the first wave had been flattened the risk of a second wave was present. He said the country may need to return to tighter restrictions if the virus started to surge again.

“It will take some time for our lives to get back to normal, to a new normal, but it will happen,” he said.

Mr Varadkar said the Cabinet will meet on Saturday to agree further actions to help businesses restart, reconnect and rehire staff who have been laid off or furloughed.

During his address, Mr Varadkar read excerpts from some of the 10,000 pieces of correspondence he has received from members of the public since the crisis began.

He spoke of Jessica, a wheelchair user, who feels an enormous cloud of loneliness around her; Anne Marie, a healthcare worker who contracted Covid-19 who described her patients as like family; Phil, a pensioner who lives alone who is struggling with isolation; and Rachel, 13, who is worried about her grandparents.

“We’re doing this for Jessica, for Anne Marie, for Phil, for Rachel and for everyone else who are struggling as best they can to come through this crisis,” said Mr Varadkar.

“We’re doing this for each other.

“The coronavirus is cruel and inhuman however the stories I am hearing every day are stories of human kindness.”

Mr Varadkar spoke of the pain for families unable to properly grieve for all those who had lost their lives in recent weeks.

“When we come through this we will come together as a nation and grieve together for everyone who has died over the course of this emergency,” he said.

He said Irish people had met the crisis with “remarkable courage and sense of solidarity”.

Mr Varadkar urged people to “stay the course” and “continue the fight”.

He said all the personal stories of loss and hardship had formed a “tapestry of struggle and sacrifice and sorrow”.

“It has been worthwhile, it is working, so let’s finish what we started,” said the Taoiseach.

“Thousands of lives have been saved, hundreds of thousands of people are healthy and untouched by coronavirus because of the sacrifices and choices you have made.”

Mr Varadkar said 70% of people diagnosed with the virus had made a full recovery. He said the figure would have been so much lower if the health service had been overwhelmed.

“While there is so much we do not know, tonight there is hope,” he said.

“In the weeks ahead that hope will drive us forward as we plan to emerge safely from this crisis.”