HS2 station first in world to get top sustainability rating 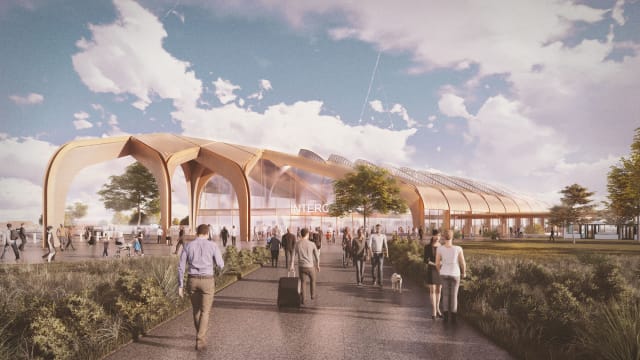 A railway station being built for HS2 has become the first in the world to be awarded the highest ranking by a sustainability rating scheme.

The design of Interchange station in the West Midlands was deemed to be “outstanding” by Breeam.

HS2 Ltd says the station will maximise daylight and natural ventilation, and use a system to capture and reuse rainwater.

There will be 222 electric vehicle charging points and storage facilities for 176 bicycles.

HS2’s environment and town planning director Peter Miller said: “Our aim is to design, construct and operate HS2 to reduce carbon and to minimise the effect of the project on the environment.

“Our stations will be amongst the most environmentally friendly stations in the world, so this certification is fantastic news for Interchange station.

“In building the station, we are also committed to sourcing and making efficient use of sustainable materials, reducing waste and maximising the proportion of material diverted from landfill.”

The interim “outstanding” rating was given by Breeam based on the station’s designs and future commitments.

A final certificate will be issued once the building is completed.

Interchange station will be located to the east of Birmingham, near the NEC event venue and Birmingham airport.

The latest HS2 business case published by the Department for Transport stated that it is due to be completed in May 2027.

Passenger trains between west London and central Birmingham, calling at Interchange, are due to start running between 2029 and 2033.