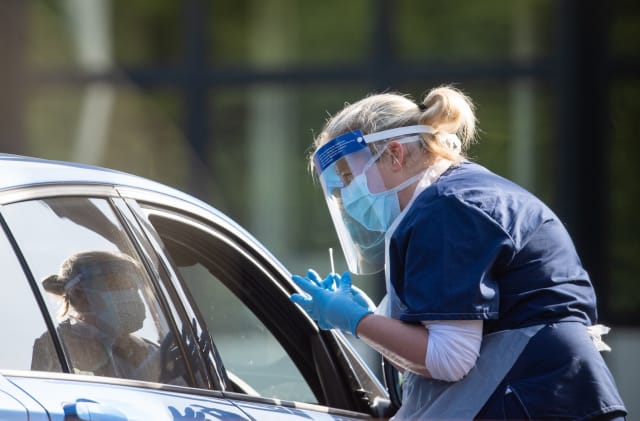 The Government will hit its 100,000-a-day coronavirus testing target “or be very close”, a minister has said.

Housing Secretary Robert Jenrick said he thinks Government testing for Covid-19 will have been a “success” even if the target of 100,000 tests is not met.

The deadline for hitting the target passed on Thursday but a time lag in reporting results means it will not be known until Friday whether the target was met.

Health Secretary Matt Hancock is due to deliver an update on testing later, Mr Jenrick said.

Mr Jenrick told Sky News: “I think we will either have met it or be very close, and in that sense the target will have succeeded because it will have galvanised people across government, in the private sector and across the country.

“This in itself is just a stepping stone; we need to go beyond 100,000, but we have seen now a very substantial increase in testing in quite a short period of time, so in that sense it’s been a success, but there’s more to be done.”

Mr Jenrick also told BBC Breakfast there is a definite need to increase testing past 100,000 per day – seen by many as a key route out of lockdown.

Regarding face masks and face coverings, the minister said the evidence showed they offer “modest benefits” but they might “be a way of giving us all more confidence in going about our business in a safe way”.

Following an indication from Prime Minister Boris Johnson on Thursday that the guidance on face masks will change, Mr Jenrick added that a mask “does not make a huge difference but it might make some”, adding that they may help people feel safer going to work.

Asked about household waste tips, Mr Jenrick said not all sites will reopen over this weekend but there is “no reason why you can’t travel to your tip to put your household waste there or do your recycling”.

He said councils are being urged to reopen them as soon as possible to prevent any more rubbish or recycling building up in people’s homes.

It comes as a BBC poll of 1,000 people found that more than 60% would be uncomfortable about going out to bars and restaurants or using public transport should ministers decide to relax the lockdown.

More than 40% would still be reluctant to go shopping or send their children to school and more than 30% would be worried about going to work or meeting friends.

The poll came as:

– Ryanair said up to 3,000 jobs could be lost at the airline, mainly made up of pilot and cabin crew roles, while unpaid leave and pay cuts of up to 20% are also proposed.

– The nation applauded NHS workers for the sixth Thursday in a row, with the PM’s fiancee, Carrie Symonds, saying she has “another wonderful reason” to applaud the health service the day after she gave birth to a son.

– US President Donald Trump claimed he had seen evidence to support the theory that the virus originated in an infectious disease lab in Wuhan, the epicentre of China’s outbreak.

– Senior NHS England director Professor Keith Willett said care homes will become “the epicentres of transmission” for the next few weeks, according to the Independent.

On Thursday, the PM promised to deliver a “comprehensive plan” next week on how the lockdown may be eased after declaring the UK is “past the peak” of the coronavirus outbreak.

Mr Johnson said he would be producing a “road map, a menu of options” explaining how to get the economy moving and children back to school while still suppressing the disease’s spread.

Mr Johnson made his commitment as he fronted his first Downing Street press conference since leaving hospital for Covid-19.

He praised the NHS, saying he had been “very, very lucky” but “thousands of people have been less fortunate than I was”.