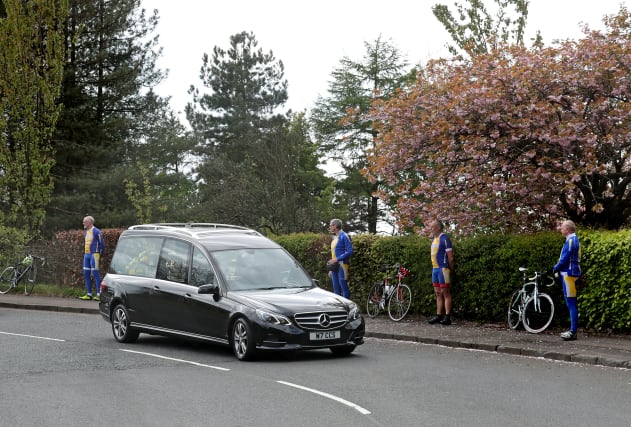 Members of a local cycling club gathered to form a guard of honour for a longstanding member who died after contracting coronavirus.

Archie Berry was residing in a care home in Blairdardie, according to a fellow member of the Loch Lomond Road Cycling Club.

The 86-year-old, who had two sons and a daughter, had been a member since the 1960s and took part in many races while also holding positions at the club.

Members followed social distance guidelines as they formed a guard of honour on the way to the funeral on Friday.

The hearse passed several members with their bikes and yellow and blue uniforms before reaching Dalnottar Crematorium in Clydebank.

Gordon Dick from the club told the PA news agency: “He had many friends in the club and held many positions from general secretary to race promoter.

“He always had a story to tell and was a great racing club cyclist in his day.

“He always enjoyed his drum-ups and brewing his tea at the side of Loch Lomond.”

Ten years ago Mr Berry drove a covering vehicle when the club did a charity cycle ride from Land’s End to John O’Groats over a week.

He looked after the rider’s gear and kit during the ride which raised more than £10,000 for Children’s Hospices Across Scotland (CHAS) and their Robin House facility in nearby Balloch.

Mr Dick added: “Cycling was his life for many years but sadly he suffered from dementia and was admitted to the care home about 18 months (ago).

“When he couldn’t cycle himself up to about seven years ago he used to help out at events, timekeep and set the riders off from a standing start.

“He would always be at the finish with tea and biscuits.”