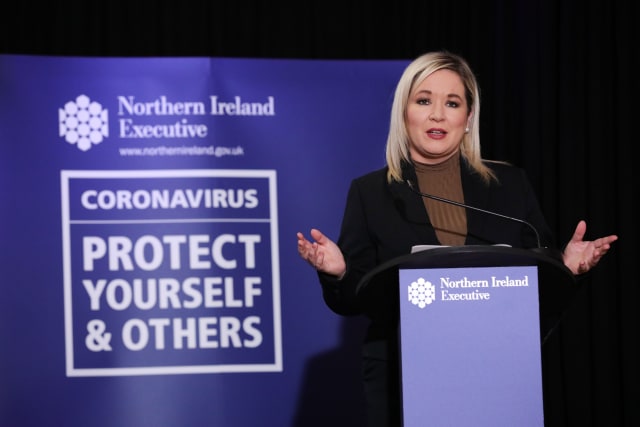 The battle against coronavirus “is now in our care homes”, Northern Ireland’s deputy First Minister has said.

Michelle O’Neill was speaking after new figures indicated that 40% of deaths associated with Covid-19 were happening in care homes.

She also revealed during the Stormont Executive’s daily press briefing that a pathway to recovery will be published next week.

However, both Ms O’Neill and First Minister Arlene Foster warned that the public need to be “realistic” about coming out of lockdown.

“We know that you are desperate to get back to the life that you had before … however as strong as that desire may be, we also need to be realistic and as we head into another weekend we have to stay home as much as possible,” Mrs Foster said.

“The danger of Covid-19 cases spiking again is still very real. Having come so far in containing this killer disease it would be a real tragedy if we were to undo all of our work by becoming complacent.”

Ms O’Neill said the pathway will be “criteria-led”, not “calendar-led”.

“We need to be realistic about what we’re living through, we need to accept that Covid-19 could be here for some considerable time to come,” she said.

“There will be no single turning point, there will be no sweeping changes to the regulations but we also understand that people want to see light at the end of the tunnel.”

The department of health earlier announced a further 18 deaths of patients with coronavirus in Northern Ireland.

This brings the total number of deaths in the region to 365 but the true total is likely to be higher when deaths in the community are added in.

The latest figures from the department include four deaths within the last 24 hours as well as confirmation of a further 14.

Earlier, the Northern Ireland Statistical and Research Agency (NISRA) indicated there had been 393 deaths by April 24.

They may or may not have previously tested positive for the virus.

The 161 deaths in care homes and hospices involved 57 separate establishments.

Mrs Foster and Ms O’Neill both expressed their concern about the number of deaths in care homes.

Mrs Foster also said that “while alarming” the figures were reflected across the UK and the Republic of Ireland.

Comparing the 40% figure in Northern Ireland, she said the figure was 45% in the Republic of Ireland, 52% in Scotland and 48% in Wales.

“It is something we are very much alert to and taking actions upon,” she said.

Ms O’Neill added: “The battle is now in our care homes.

“We must do everything that’s necessary to protect those vulnerable residents and the staff that are working there.”

On Thursday, the department received criticism over “gaps and losses” in its data around the spread of Covid-19.

The UK Statistics Authority said there was “serious public concern” about changes made in how the data is reported during the pandemic.

Meanwhile, separate analyses of the NISRA figures shows that the provisional number of total deaths registered in Northern Ireland in the week ending April 24 (week 16) was 470, 46 more than in week 15 and 186 more than the five-year average of 284.

Over the last four weeks in total, 596 excess deaths (deaths above the average for the corresponding period in previous years) have been registered in Northern Ireland.