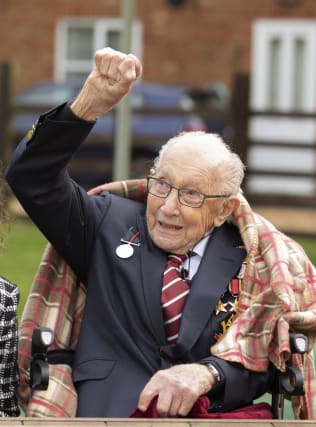 Captain Tom Moore’s NHS appeal has raised £30 million on his 100th birthday, while a nurse has knitted hearts for people in palliative care in Thursday’s uplifting news.

The appeal by NHS fundraiser Captain Tom Moore topped £30 million on Thursday as he celebrated his 100th birthday.

The Second World War veteran originally set out to walk 100 laps of his garden before his milestone with a fundraising target of £1,000.

But his determination captured the public imagination and at around 9.20am on Thursday, an hour after the RAF staged a flypast in his honour, he reached £30 million raised for NHS charities.

He has received thousands of cards from well-wishers, including the Queen, and got a birthday message from the Prime Minister on Thursday.

Captain Tom said: “Reaching 100 is quite something. Reaching 100 with such interest in me and huge generosity from the public is very overwhelming.”

A nurse who has knitted hearts for people in palliative care has encouraged others to join her.

Amber Cantwell, 24, from Norfolk, decided to make the hearts after seeing how important skin-to-skin contact can be for patients during their final days.

“Unfortunately because of the nature of the coronavirus, they are deprived of human touch and love from their relatives,” Ms Cantwell told the PA news agency.

“I thought the love hearts would provide comfort during these times and act as a hand to hold, to let them know that although no-one is visiting, they are at the front of our minds.”

The hearts, which take around 90 minutes to make, will be posted to palliative care patients in community hospices and care homes.

A goose which has taken advantage of the lockdown to nest in one of the north of England’s busiest transport hubs has laid its fourth egg.

The proud mother is becoming a social media star after making her home in a raised flowerbed in the middle of the main concourse at York railway station.

The area is normally crowded with commuters and tourists but, over the last few weeks, it has seen just a fraction of its normal footfall.

A spokesman for London North Eastern Railway said: “We’re grateful to our customers for continuing to follow the advice to stay at home, although we expect York station could soon become home to several more guests in the coming days.”

A family of robins including six chicks have found the perfect home – in the wheel arch of a parked-up Toyota Corolla.

Discovered by Toyota staff at the firm’s press fleet headquarters, staff were able to carefully place a video camera opposite the nest in order to monitor the progress of the birds.

The car was parked alongside a 40-strong fleet usually used for press test drives. But due to coronavirus restrictions the fleet has been grounded, giving more time for the robins to nest.

Graham Bothamley, Toyota press fleet manager, said: “I noticed a pile of leaves around the base of the rear wheel arch of the Corolla on April 12 and discovered a nest full of eggs balanced on the top of the wheel.

“With our car test drives on hold owing to the current lockdown, the family have plenty of peace and quiet.”

Two Labradors are locked in competition to see who can be the most badly behaved on a walk, in the latest spoof video from a popular sports commentator.

Andrew Cotter, known for his coverage of golf, tennis and rugby on the BBC, has been putting his skills to use during lockdown by producing spoof commentaries on the activities of his dogs Olive and Mabel.

The latest clip shows the pair out on a walk in woodland, as Cotter’s familiar tones keeps the viewer updated on their progress.

Olive was “dominating early on, eating three kilos of grass and upsetting a small child”, according to Cotter, but Mabel looks to be finishing stronger by “taking herself off to stand in this fetid pond just to please herself”.

Between the three, they have clocked more than 30 million views on Twitter.