Time for Captain Tom to rest after bringing hope and unity, says daughter 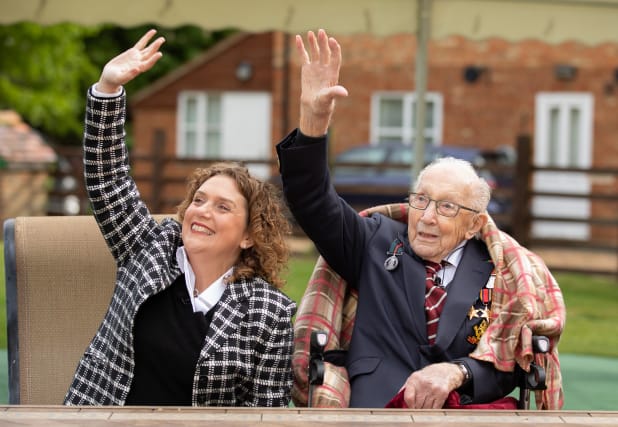 Captain Tom Moore needs a rest after uniting people across society and across nationalities, his proud daughter has said.

As her father’s fundraising hit £30 million, Hannah Ingram-Moore said that for the family the last few weeks will be “embedded in our hearts forever”.

She said the 100-year-old has “touched the hearts of many people around the world” and brought hope at a difficult time.

Ms Ingram-Moore told the BBC: “Who could have written it? I don’t think anyone, if you’d tried to make it up, you just couldn’t have done it.”

She described the Battle of Britain Memorial Flight flypast of a Spitfire and a Hurricane as “incredibly emotional”, adding: “I don’t know how I wasn’t a sobbing mess.

“It was so moving in a way that you wouldn’t expect it to be, but I think he summed it up when he said he was the only person here who would have seen those planes flying in desperation and anger.

“And now to see them fly in peacetime for such an amazing event. I mean that in itself is choking, but isn’t that something for us to all keep in mind, that what he has done is, I think, united us across society, across sex, across creed, across nationality, across all strata we are united by hope.

“We need to, as a race of human beings, we need to stay together. I think he’s given us that connection.”

She said the family has told Capt Tom to have a rest.

“We’ve said, ‘look, take a little rest now’. But I think we know that he has touched the hearts of many people around the world.

“He’s definitely engaged us all and given us hope and unity.

“So, there will be legacy. We, as a family, have come a long way in these last few weeks, and we are working hard to look at what is the future, what’s the future legacy, but he needs to have a little rest now.”

She said the fundraising page closes at midnight.

“No more walking for now. He has insisted that he will be walking again but we’ve said, ‘please, just take a little bit of rest’,” she said.