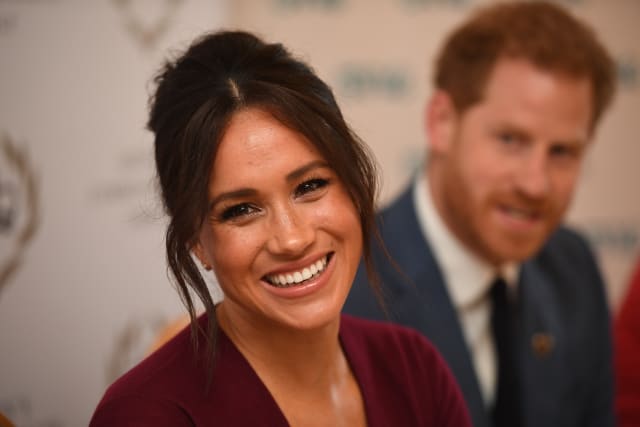 The High Court will give its ruling on the first stage of the Duchess of Sussex’s privacy claim against a British newspaper that published parts of a “private and confidential” letter to her estranged father.

Meghan is suing Associated Newspapers over five articles, two in the Mail on Sunday and three on MailOnline, which were published in February 2019 and reproduced parts of a handwritten letter she sent to Thomas Markle, 75, in August 2018.

A preliminary hearing in the case, in which lawyers for the publisher asked for parts of the duchess’s case to be struck out, was conducted remotely last week, with the judge sitting at the Royal Courts of Justice in London and lawyers and reporters attending remotely.

Mr Justice Warby will deliver his ruling on Associated Newspapers’ application at noon on Friday.

During the hearing, the judge was told the letter had been published by Associated Newspapers to satisfy the “curiosity” of readers, which it had “deliberately generated”.

Lawyers representing Meghan said the publisher had, through a series of articles, “stirred up” the dispute between her and her father.

But counsel for the publisher argued allegations by Meghan that the articles were responsible for “causing” the dispute between them are “objectionable”.

Antony White QC said Meghan’s contention that her “vulnerable” father was “harassed and humiliated”, “manipulated” and “exploited” should not form part of her case.

David Sherborne, representing the duchess, claimed the publisher had “harassed” Mr Markle, adding that it had “finally manipulated this vulnerable man into giving interviews”, which Mr Markle had later described as “lies and bullshit”.

Mr Sherborne accused the publisher of “stirring up” a dispute between Meghan and her father, and argued it “caused the very dispute” that it says, “justifies the publication of this letter”.

He claimed this was a “deliberate decision” taken by the publisher to avoid risk of her seeking to prevent publication, and also to “secure the enormous ‘scoop’” with such a “highly sensational story”.

Mr White, for the publisher, argued that some of the allegations made by Meghan are irrelevant and not made with a proper legal basis.

In written documents, Mr White said the duchess alleges the publisher was “one of the ‘tabloid’ newspapers which had been deliberately seeking to dig or stir up issues between her and her father”.

He said: “This is an allegation of seriously improper deliberate, i.e. intentional, conduct to the effect that the defendant’s motive was to seek to manufacture or stoke a family dispute for the sake of having a good story or stories to publish.”

Mr White argued that such “complex tests of mental state” of the publisher are “irrelevant to the claim for misuse of private information”.

He added: “In this context it appears that the claimant has seen fit to put these allegations on the record without having spoken to Mr Markle, verifying these allegations with him or obtaining his consent (she admits … that she has had no contact with him since the wedding).

“It is therefore highly unlikely that she has any credible basis for these allegations of impropriety towards him, or that proper particulars could be given.”

Mr White also took issue with the duchess’s allegation that the publisher “acted dishonestly” when deciding which parts of her letter to her father to publish.

He added: “It is extremely common for the media to summarise or edit documents when reporting current events, and that is not a basis for an allegation of dishonesty.

“It is open to the claimant to say, as she does, that the presentation of the letter was misleading – which is firmly denied – but there is no basis for her to allege that anyone working for the defendant was dishonest in the drafting and editing process.”

Meghan has previously said any damages she may be awarded if she wins her case will be donated to an anti-bullying charity.

Associated Newspapers wholly denies the allegations, particularly the claim that the letter was edited in any way that changed its meaning, and says it will hotly contest the case.

It is understood the Duke of Sussex and Meghan listened online to the parts of the hearing conducted by her lawyers.