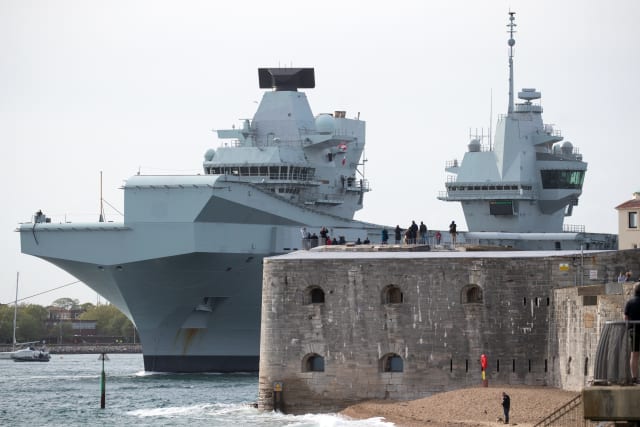 Royal Navy aircraft carrier HMS Queen Elizabeth has set sail despite two crew members being removed having tested positive for Covid-19 after being in contact with colleagues.

The departure of the 65,000-tonne warship from Portsmouth Naval Base on Wednesday had been delayed to allow the 700 ship’s company to be tested.

The two crew members who tested positive were removed from the ship, which will enter a period of quarantine at sea prior to commencing training exercises.

The Royal Navy has refused to comment on what precautions have been taken to protect the crew if one of the sailors begins to show Covid-19 symptoms onboard, although sources told the PA news agency the navy was happy that the ship was “clean” and procedures were in place.

A Royal Navy spokesman said: “All personnel sailing with the ship have undergone testing for coronavirus.

“As a further precaution, HMS Queen Elizabeth will conduct a period of isolation at sea before she continues her training.”

The ship has sailed to embark on a series of training exercises with Flag Officer Sea Training (Fost) staff as well as with F35 Lightning jets carrying out manoeuvres on the ship’s flight decks.

It is understood that all personnel joining the ship after the quarantine period will be required to have completed a 14-day period of self-isolation.

Concerns were raised ahead of the sailing after more than 600 members of the crew of a French aircraft carrier and accompanying vessels tested positive for coronavirus, while the US navy said a sailor died after testing positive for Covid-19 on the USS Theodore Roosevelt.

Shadow defence secretary John Healey had called for the military to be tested and for large-scale training exercises to be postponed to protect personnel.

A statement released by the navy said: “HMS Queen Elizabeth has sailed from Portsmouth to ensure she is ready to conduct her first operational deployment in 2021.

“She will undergo several weeks of training and assessment with the staff of Fost to ensure the UK can deliver on its commitment to have a carrier strike group ready to deploy from the end of this year.”

It continued: “She will be operating in waters close to the UK coast and the commanding officer has the discretion to cease the training, if deemed necessary.”