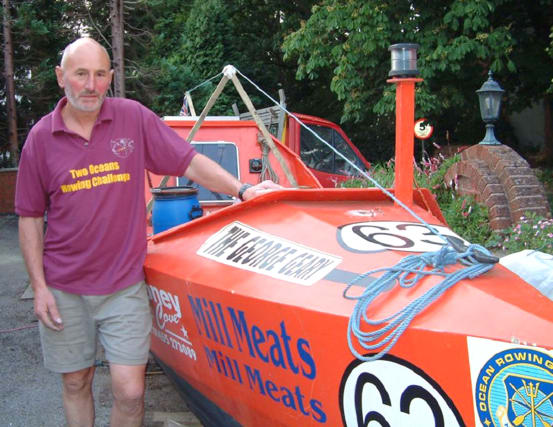 A pensioner who rowed solo across the Atlantic has been told he has broken two world records despite being towed ashore in the last few miles.

The 72-year-old is recovering in Antigua following his epic 93-day journey to raise funds for Help for Heroes.

He made landfall on Wednesday in his quest to break the Guinness World Record set by 62-year-old Gerard Marie, of France, in 2015.

Mr Walters set off on the 3,000-mile challenge from Gran Canaria on January 25, in a boat he built in his front garden 22 years ago.

But as he neared the Caribbean island of Antigua, he was blown sharply off course by strong winds.

With the weather conditions taking him towards Barbuda instead, he faced several more days of rowing to reach Antigua so he opted to call for help and be towed into port.

On Thursday, Mr Walters was told that, despite asking for assistance, he had still fulfilled the criteria to break two world records.

Describing how he was feeling following the crossing, he told BBC Radio 4: “It feels kind of strange at the moment.

“The body seems OK but the legs haven’t quite adjusted at the moment. It’s been 93 days.”

Mr Walters said he had slept for up to two hours at a time during the crossing, forming a habit of rowing before sunrise.

This was Mr Walters’ fifth Atlantic crossing, and his third as a solo rower.

Describing his daily routine starting with a breakfast of sausages, beans and porridge, the charity fundraiser said: “Dark rowing is fantastic because you are looking at where the sunrise comes up. You have all these colours and contours.”

Commenting on the last few hours of the crossing, he told the BBC: “The problem was with the wind. It was taking me past Antigua.

“As I was rowing, I knew that I wouldn’t have made the island so it was necessary to get a little bit of help.”

Mr Walters, who may have to wait at least a fortnight to fly back to the UK, said he had learned of the UK’s lockdown from his wife during his journey.

“I am just going to take things as they come when I get back,” he added.

His wife Jean, 62, said before the mission’s conclusion that her husband had been keen to record a “massive personal achievement”.

“Graham has always been an adventurer, so he’s had it in his mind for a while now to do one ‘final journey’,” she said.

Mr Walters chose to raise funds for Help for Heroes after seeing the grit and determination of wounded veterans taking part in a previous Atlantic rowing race.

David Martin, head of supporter fundraising at Help for Heroes, said: “Few of us would attempt such a challenge in the first flush of youth – let alone in our 70s.

“Graham is clearly a remarkable and determined man.”

– Help for Heroes and Graham Walters have urged people to donate to the cause via www.justgiving.com/fundraising/Georgegearyrow.