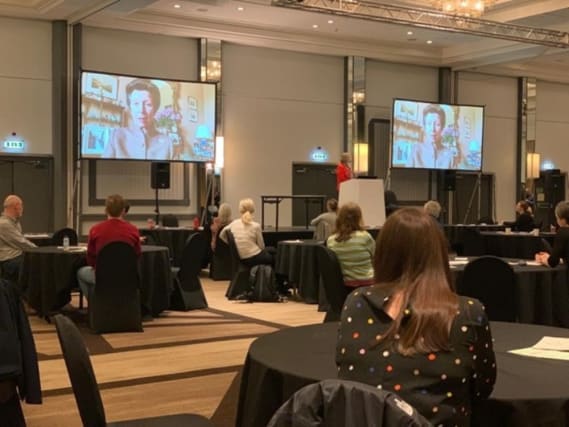 The Princess Royal has thanked everyone involved in creating an emergency hospital for coronavirus patients.

NHS Scotland staff and building contractors from across Scotland constructed NHS Louisa Jordan in Glasgow in just under three weeks, with the work completed by April 19.

The hospital, at the Scottish Events Campus, has an initial capacity of 300 beds but can be expanded to more than 1,000 if needed.

In a video message which was also posted on the royal family’s Twitter account, Anne thanked those involved in the project.

She said: “May I offer my congratulations to everyone who has made it possible to open the NHS Louisa Jordan Hospital in Glasgow.

“Construction work only began on the 31st of March and was completed on the 19th of April, an astonishing achievement by contractors and all the NHS staff who were involved in the project.

“The role of this building is about providing spare capacity which will ensure support to the whole of the NHS in Scotland, and importantly will give confidence that there are enough facilities available for whatever happens now, or in the future.”

She added: “Covid-19 has done something very rare, it has affected every single person’s life in some way, sadly for some in a very personal and final way, but while many people feel frustrated and helpless, the Louisa Jordan hospital is a way of being positive and helpful.

“And although we would all hope that it doesn’t need to be used, we can all be very grateful that it exists.”

The hospital is named after Glasgow-born First World War nurse Sister Louisa Jordan, who died on active service in Serbia in 1915 as part of the Scottish Women’s Hospitals for Foreign Services.

Jill Young, chief executive of NHS Louisa Jordan, said: “I want to thank the Princess Royal for her thoughtful words for everyone involved in transforming the Scottish Events Campus into the NHS Louisa Jordan.

“From the architects, builders, engineers and plumbers, to the clinicians, nurses, porters and cleaners, every single person involved in creating this facility should be immensely proud of the role they have played.

“It is a privilege to have been involved in creating a national facility that stands ready to treat patients in a safe, effective and compassionate way, if required.”

The Scottish Government said the hospital stands ready to treat patients from across Scotland if required and will be operational on a phased basis, based on demand.

It said the decision on patients being accepted at the hospital will be reviewed on a regular basis.