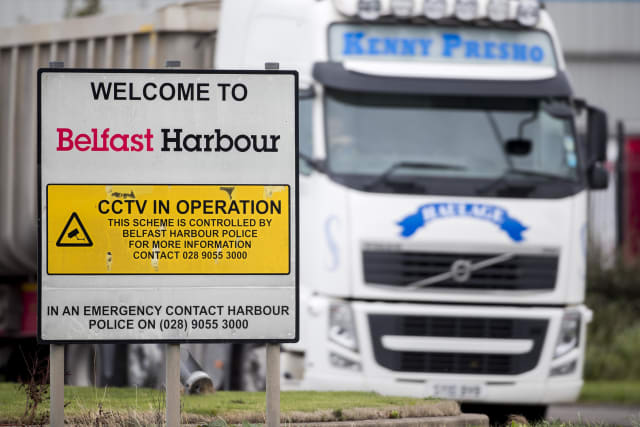 Post-Brexit paperwork costs could leave trade across the Irish Sea in some products “unviable” unless a legal solution is pinned down, Northern Ireland’s largest retailers said.

Many firms have had to concentrate on the coronavirus threat and devoted little time to planning for the post-transition period next year, another business leader warned.

A Northern Ireland protocol designed to avoid a hard Irish border by keeping the country in line with EU regulations has threatened more red tape on commerce with Great Britain, companies fear.

Aodhan Connolly’s Northern Ireland Retail Consortium represents supermarkets like Sainsbury’s, Asda and Lidl plus a range of other retailers.

The director said they needed time to implement any new regime or it would not work.

“It needs to be pinned down. There is no Hail Mary pass, there is no gentleman’s agreement.

“That needs to be pinned down in legislation, in treaty, otherwise we are going to have extra friction which we cannot afford.”

The transition period runs out at the end of the year and Downing Street has insisted there will be no extension.

The documents cost £200 per product.

Mr Connolly said: “You can see how the costs rise.

“If all the paperwork is not right then that lorry is not getting on that boat.”

He added: “If we don’t have those mitigations there is a simple equation.

“If the new costs because of this protocol are higher than the profit margin, either the product or the business model becomes unviable.

Angela McGowan, director of the CBI in Northern Ireland, said it was commonly felt that larger companies would cope better than smaller ones because they could afford to employ staff to deal with paperwork.

She added: “Companies are not even thinking about this at the moment.

“They have not got the capacity to put any plans in place.

“I would imagine for the smaller companies it is going to be even more difficult.

“So many have closed, they do not know when they are going to open again and don’t know what their supply chains are going to look like with coronavirus, never mind this.”

Following the first meeting of the EU-UK joint committee in March, the European Commission said the two sides had agreed on the importance for the UK to “set out its plans over the coming months” regarding the implementation of the Irish protocol to prevent a hard border.

A statement said the parties agreed on the importance for the UK to setting out its plans over the coming months on implementation of the protocol on Ireland/Northern Ireland.

The first meeting of the Ireland/Northern Ireland Specialised Committee was held on Thursday via video conference, co-chaired by officials from the UK Government and European Commission.

The Committee was tasked by the first meeting of the Withdrawal Agreement Joint Committee, held on March 30, to start work on implementing the Northern Ireland Protocol.

A representative from the Northern Ireland Executive also attended as part of the UK delegation.

A UK statement said: “The UK was clear that our approach at all times will be focused on protecting the Belfast/Good Friday Agreement and gains of the peace process, and on preserving Northern Ireland’s place in the UK.

“UK officials reaffirmed our commitment to complying with our legal obligations under the Protocol, just as we expect the EU to comply with theirs.”