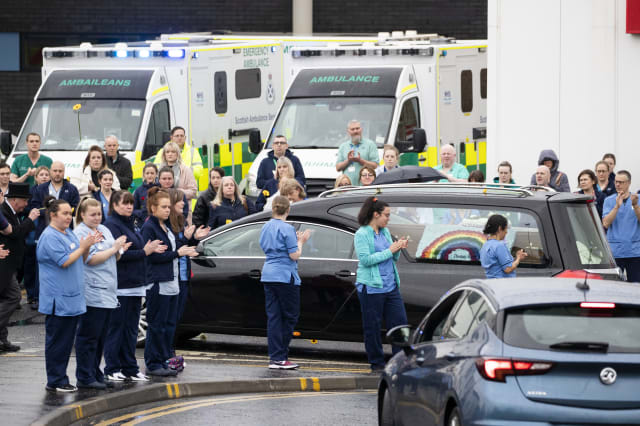 Hundreds of people gathered to pay tribute to an NHS staff member who died after contracting coronavirus as her funeral cortege passed the hospital where she worked.

Jane Murphy, 73, worked at Edinburgh Royal Infirmary for almost 30 years, first as a cleaner before being retrained as a clinical support worker.

She had been placed on sick leave when the coronavirus outbreak first emerged due to her age and is believed to have died on April 16.

Her funeral cortege passed the hospital on Thursday morning to allow colleagues to pay their last respects.

The road up to the accident and emergency department was lined by medical staff who threw flowers on to the hearse, and it stopped outside the entrance so more floral tributes could be placed inside.

Janice Alexander, the hospital’s site director, said: “Jane was an exceptionally well-respected and well-loved colleague at the Royal Infirmary, who will be greatly missed by many.

“From everyone at the site, and across NHS Lothian, I would like to extend our heartfelt thoughts and wishes to Jane’s family at this difficult time.”

A number of ambulances pulled up and put their blue lights on as the cortege passed the hospital, and staff clapped and a piper played.

Floral tributes in the hearse included a rainbow and one which read “Mum”.

After leaving the hospital, the cortege continued to Mortonhall Crematorium.

Saxophonist Saxingh dedicated a performance to Ms Murphy earlier this month, saying: “She was an ace worker and a much-loved member of staff.

“She continued to work and refused to retire from the NHS and she’s been there as a mentor for nurses and doctors who are now consultants and senior charge nurses everywhere.”