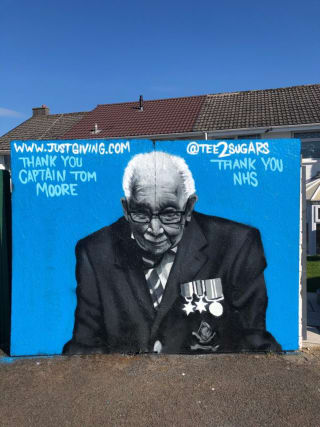 A mural of NHS fundraiser Captain Tom Moore has appeared on a wall in South Wales.

The graffiti tribute to the Second World War veteran was completed on April 19, ahead of his 100th birthday on Thursday.

Artist Tee2Sugars said the artwork, painted onto a wall in Merthyr Tydfil, was a “thank you” to Capt Tom, who has now raised £30 million for NHS charities

The artist told the PA news agency: “Captain Tom Moore is a massive inspiration to how, in unprecedented times, we can pull together to do something amazing.

“And this my way to say thank you to such a great man and his mission.”

Captain Tom originally set out to walk 100 laps of his garden before his milestone birthday with a fundraising target of £1,000.

But his determination captured the public imagination and at around 9.20am on Thursday, an hour after the RAF staged a flypast in his honour, he reached £30 million raised for NHS charities.