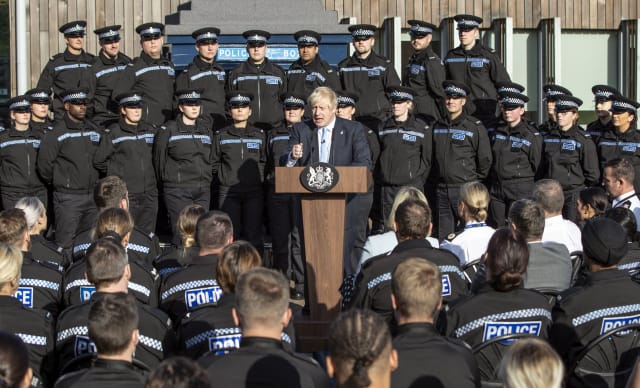 Police forces have hired 3,005 extra officers in the first six months of the Government’s recruitment drive to sign up 20,000 more over the next three years.

The overall provisional headcount of officers in England and Wales is now 131,596.

This is a 5% rise on March last year, of which the recruitment drive accounts for approximately half, a Home Office report showing the progress in the scheme since its launch in October to March said.

Plans are “on track” to meet the first year’s target of 6,000 by March 2021 and the new recruits are on top of those hired to fill existing vacancies, the Home Office said.

Boris Johnson vowed to swell the police service to more than 140,000 officers by mid-2022 if he was elected Prime Minister.

Thursday’s report said using headcount figures was the “most appropriate way to measure and track recruitment” rather than looking at full-time equivalent positions.

It added: “For new recruits, the difference in the two measures is likely to be even smaller as most new joiners tend to start on a full-time basis.”

All the figures gathered in the last three months are provisional.

When the first phase of the roll-out was announced in October, the Home Office pledged to provide £750 million to support the 43 forces to recruit up to 6,000 new officers by the end of 2020/21.

This funding would cover all associated costs, including training and kit.

When the recruitment drive was announced, some police chiefs called on the Government to make sure forces received their fair share of resources.

The three forces with the highest recruitment target for the first year are the Metropolitan Police (1,369), West Midlands (366) and Greater Manchester (347).

Other forces due to receive a big boost in their numbers this financial year include West Yorkshire (256), Merseyside (200), Northumbria (185) and Thames Valley (183).

Those to receive the lowest numbers of new recruits in the first year are Warwickshire (41), Dyfed-Powys (42) and City of London (44).

The College of Policing is setting up online assessment centres so recruitment can carry on during the coronavirus outbreak and is expected to be rolled out across the country in June after a series of trials.