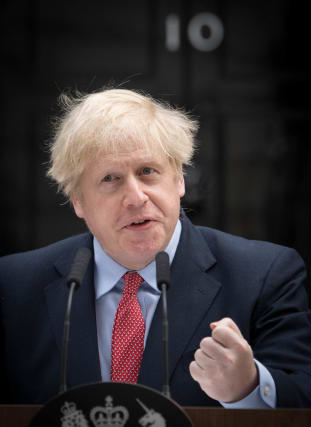 Boris Johnson will front his first daily press conference since recovering from Covid-19 on Thursday amid mounting pressure on him to set out a path out of the lockdown.

But with the UK’s coronavirus death toll now the third highest in the world after the US and Italy, Downing Street is playing down any expectations of an easing of restrictions.

Number 10 said a Cabinet meeting earlier in the day would look at the “response in general” but not make any decisions on lockdown measures.

That response was facing further criticism as Health Secretary Matt Hancock’s deadline arrived for carrying out 100,000 Covid-19 tests a day.

With just over 52,000 tests carried out on Tuesday, the deadline looks set to be missed although that will not become clear until Friday.

The target has been condemned by the NHS Providers group as a “red herring” which distracts from shortcomings in the long-term coronavirus strategy.

It released a report on Thursday which highlights how the English health and care system “started from a poor position” as Covid-19 tightened its grip on Europe, and consistently “struggled” to demonstrate a “clear, effective and well communicated strategy”, with a lack of clarity on who would be tested, when, how, and with what frequency.

Chris Hopson, chief executive of NHS Providers, which represents hospitals and NHS trusts in England, said: “Testing is one area where, despite all the work delivered by trusts and the NHS, the health and care system as a whole has struggled to develop an effective, co-ordinated approach.”

The testing deadline was reached as:

– An international clinical trial, co-led by University College London and the UK’s Medical Research Council, found the Ebola drug remdesivir speeds up recovery from coronavirus by almost a third

Thursday’s Cabinet and a gathering of the Scientific Advisory Group for Emergencies (Sage) come as Scotland’s First Minister Nicola Sturgeon warned that easing lockdown would not be a “flick of the switch moment”.

Sage is looking at a selection of options for easing restrictions while keeping the reproduction rate of the coronavirus – the number of new cases linked to a single individual – below one to stop it spreading exponentially.

Germany saw a rise in that rate after easing its own lockdown.

With some Tory backbenchers pressing for an easing of measures for the sake of the economy, Business Secretary Alok Sharma is set to put forward plans for an eventual “workplace by workplace” approach.

A Business Department spokesman said: “The Government has already set out five clear tests to consider before making any adjustment to its approach.

“It is only right the we work together with industry and unions to ensure workplaces are safe for both those in work now and for those going back to work as Government measures develop.”

But Ms Sturgeon said on Wednesday night that she was “far from convinced” measures could be eased on the next review date of May 7.

“People talk about lifting the lockdown, that is not going to be a flick of the switch moment – we’re going to have to be very careful, very slow, very gradual.

“I’m far from convinced at this stage that when we get to the next review point on the 7th of May we’ll be in a position to lift any of these measures right now, because the margins of manoeuvre that we’re operating in right now are very, very, very tight and narrow.”

Her comments came after it was announced that a total of 26,097 people have died in hospitals, care homes and the wider community in the UK after contracting Covid-19.

It is the first time data on the number of deaths in care homes and the wider community has been included in the Government’s daily updates.

The total is around 17% higher than previous data showed and includes an additional 3,811 deaths recorded since the start of the outbreak.

Of these, around 70% were outside hospital settings.

The change in measurement means the UK death toll is the third highest in the world, behind the US and Italy, based on data from Johns Hopkins University.

The Government pointed out other countries may report figures differently and any lag is unclear, although France and Italy also include deaths in care homes.