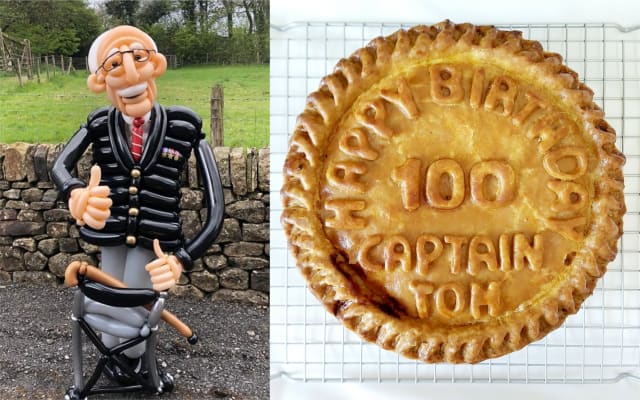 From balloon sculptures to pork pies, the public found unique ways to pay tribute to Captain Tom Moore on his 100th birthday.

The Second World War veteran, who has been appointed as an honorary colonel of the Army Foundation College, captured the public’s imagination in raising £30 million for NHS charities by walking laps of his garden.

And they wanted to show their appreciation as he celebrated turning 100 on Thursday.

Among the more spectacular offerings was a performance of Happy Birthday by singers and musicians from the Royal Opera House.

A video posted on Twitter by the company showed performers joining in from their own homes to produce a unique rendition of the popular celebratory tune.

There were plenty more renditions, including from schools, transport workers and police forces – as well as one from refuse workers in Exeter.

The public showed their artistic side to render the centenarian fundraiser in various forms – including one woman who constructed an intricate balloon sculpture.

In Cumbria, residents in Whitehaven came together to display a giant graphic rendering of Captain Tom on a wall in the town.

The project was organised by one resident, Chris Underwood, who enlisted a local designer, Trash Panda, and manufacturer to bring it together.

Mike Starkie, the mayor of Copeland, said on Facebook: “When we asked Chris who was funding the design he explained, ‘I’m just paying for it myself as I’d rather people gave their donations to support purchasing PPE or the work of the NHS’.

“This is an amazing show of community spirit from a local gentlemen, for all to enjoy.”

Up and down the country, cakes were made to honour the occasion.

In Walsall, The Pie Makers paid tribute in their own way with a special birthday pork pie.

The savoury treat was part of a box of pies delivered by the shop to a local care home.