Have the Government’s five key lockdown tests been met? 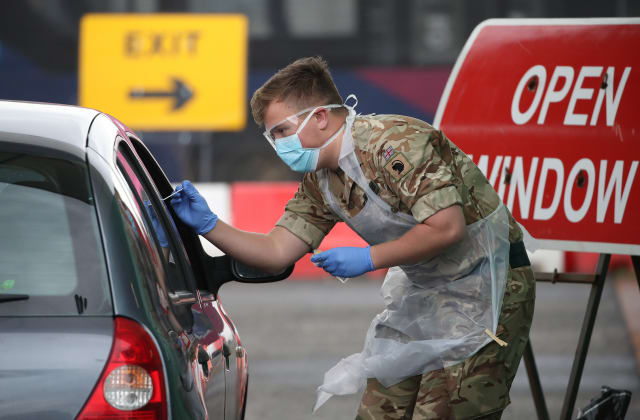 He said that he would set out a “road map” for easing lockdown restrictions next week.

But has the Government met the five tests it says must be reached before the lockdown measures can be adjusted?

– Test 1. The NHS has the capacity to provide critical care right across the UK

The first test is whether Britain has the capacity to look after those seriously ill with coronavirus – which can be measured by spare beds in intensive care.

Hospitals have not been overwhelmed by patients so far in the pandemic, and in some places have been aided by the opening of the new NHS Nightingales.

Health Secretary Matt Hancock said on Monday that there were 3,190 spare critical care beds in the health service, and that in most parts of the country the number of people in hospital with coronavirus is beginning to fall.

This test, therefore, appears to have been met.

– Test 2. A sustained and consistent fall in daily deaths from coronavirus

Mr Johnson said on Thursday that the UK had passed the peak of coronavirus infections and was on the downward slope.

Scientists estimate England’s daily hospital death toll peaked around April 8, and it has been very steadily falling since.

However, the picture is less clear when deaths in the community are included, with some suggestions that deaths in care homes may still be increasing.

More data is needed to be clear whether this test has been met.

– Test 3. The rate of infection decreased to manageable levels across the board

The “R” value, or infection rate, is now thought to be somewhere between 0.5 and one, meaning that each person infected with the virus passes it on to fewer than one other person.

This in turn means the total number of cases is falling. But if R rises above one, there could be another exponential rise in infections.

It is likely this test has been met across the board, but the Government will be extremely anxious to ensure the rate of infection does not rise again.

– Test 4. Operational challenges including testing and PPE are in hand, with supply able to meet future demand

The Government is getting closer to hitting its target of testing 100,000 people a day by the end of the month, with 81,611 tests carried out on Wednesday.

But while more than a billion items of personal protective equipment (PPE) have been distributed, concerns over shortages remain, particularly among care home staff.

Given the global spread of the disease, operational challenges in sourcing PPE may continue for some time.

So far, this test does not appear to have been met.

– Test 5. Confident that any adjustments to the current measures will not risk a second peak of infections

Mr Johnson said on Thursday he would not risk a second peak in the disease by relaxing restrictions too quickly.

He said he would set out a “road map” for easing lockdown restrictions, with the dates and times of each individual measure depending on where the country was in the epidemic.

Mr Johnson stressed that to “avoid disaster” the fifth test was that nothing the Government does lifts the R value above one.

The Government’s scientific advisers are presenting a series of options to ministers about easing lockdown measures, a combination of which would keep the R value below one.

Ministers could use the new advice issued to them, along with the altered wording, to lift a number of the social distancing measures in place and help get Britain back to work.