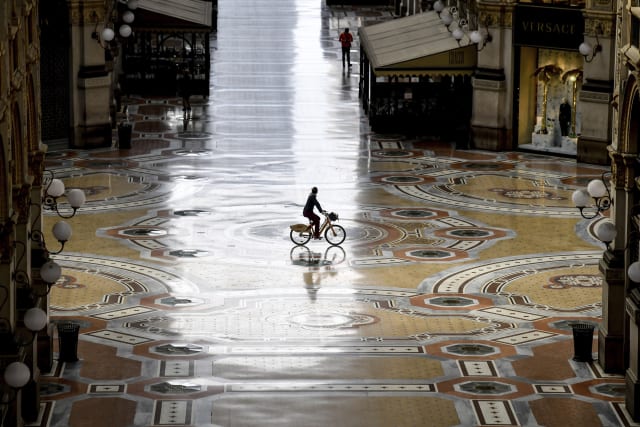 The European Central Bank is ramping up its measures to cushion the economy against a record downturn caused by the Covid-19 outbreak.

The monetary authority for the 19 countries that use the euro currency on Thursday lowered the interest rate on cheap loans it provides to banks.

It also offered new credit lines to banks to cushion the economy, which suffered its biggest contraction in the first quarter since records began in 1995.

The new ECB measures announced on Thursday come on top of already announced stimulus efforts that include an ongoing 750 billion euros in bond purchases.

Those purchases help drive down market borrowing rates for companies and governments.

In particular, they have kept a lid on financing costs for heavily indebted Italy, one of the countries hardest hit by the outbreak.

The bank has also eased requirements for bank capital cushions, relief that means banks are not pressed to restrict lending in order to shore up their own finances.

The ECB also made it easier for banks to tap cheap credit directly from the central bank by loosening collateral requirements.

Markets will now be looking for cues on the bank’s stance from ECB President Christine Lagarde at her post-decision news conference.

Ms Lagarde initially bobbled the bank’s response at its March 12 meeting by saying the bank was not involved in capping borrowing costs for indebted governments, a gaffe that was quickly withdrawn and followed by the pandemic emergency bond purchases that have helped keep borrowing markets relatively calm.

The ECB took the steps after official figures showed the eurozone economy contracted by a record 3.8% in the first three months of the year, the biggest drop since statistics started being kept in 1995 and worse than the drop in 2009 during the Great Recession that followed the bankruptcy of US investment bank Lehman Brothers.

The bank had already lowered its key interest rate benchmarks to record lows before the virus outbreak during a period of sub-par growth in Europe.