D-Day hero, 99, calls on public to clap for veterans on VE Day 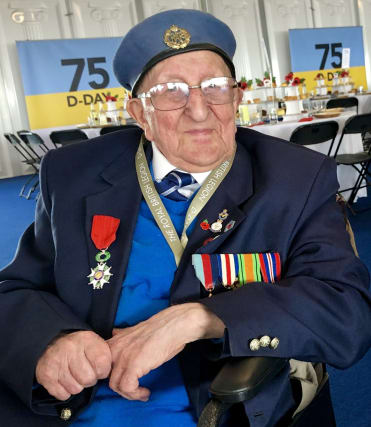 A 99-year-old who was one of thousands of brave men who landed on French beaches on D-Day is calling on the public to clap for veterans on VE Day.

Stanley Northeast was with the RAF, attached to 6074 Squadron (Tigers of the Middle East) during the Allied invasion in 1944, and served across Europe as British forces pushed towards Berlin.

He was stationed on the Belgian-German border when victory in Europe was announced on May 8 1945.

Looking back he said: “The news was met with cheering which was fairly low key because we still had an important job to do.”

He was one of the first to be flown home 10 days later when his name was pulled out of a hat, flying out of Antwerp with others aboard a packed Dakota plane.

Now he and his son Mike are calling for people to remember the heroes of the Second World War in the same way they are clapping for the NHS heroes of today.

The great-grandfather, who lives in Rustington, West Sussex, told the PA news agency: “I think its very important because we haven’t got much to celebrate at the moment, but I will also be remembering all those poor comrades who didn’t survive to see this day.

“I’m sad that I won’t be able to meet up with some of the other old veterans because we are all getting on a bit now, and this is probably the last chance we have of a get-together like we did for the D-Day celebrations last year.”

He said he is as scared now during the pandemic as he was landing on the beach on D-Day.

Asked about the Clap 4 VE Day 75 campaign thought up by his son, he said: “Brilliant idea because it gives us all something a bit more positive to think about than this blinking virus all the time.”

Mike Northeast, 65, said: “His generations are being denied their 75th anniversary because of Covid and I thought this would be a good way as a nation to honour them.

While the usual celebrations for this year’s VE Day are looking increasingly unlikely as the coronavirus lockdown continues, he said there are still ways to commemorate the events of 1945.

He said: “Let’s do some of the things they did in 1945 – make bunting and make flags. With modern-day technology we could have a virtual street party.

“I know it’s a cliche, the Dunkirk spirit, but I am sure that’s the way we are going to get through this now.”

Anyone wishing to find out more can visit the Clap 4 VE Day 75 Facebook page: https://www.facebook.com/Clap4VEDay75/