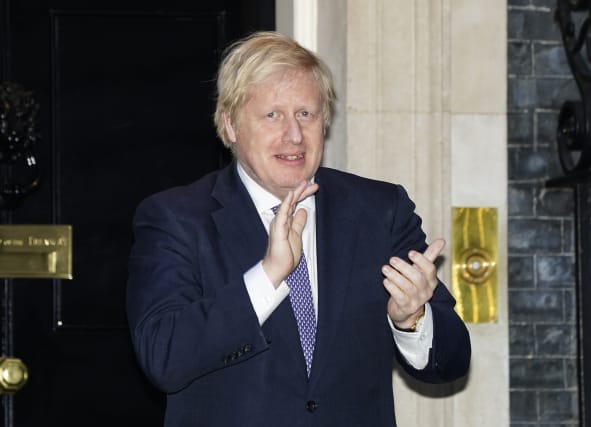 Boris Johnson has promised to deliver a “comprehensive plan” next week on how the lockdown may be eased after declaring the UK is “past the peak” of the coronavirus outbreak.

The Prime Minister said on Thursday he would be producing a “road map, a menu of options” explaining how to get get the economy moving and children back to school while still suppressing the disease’s spread.

Mr Johnson made the commitment as he fronted his first Downing Street press conference since being hospitalised for Covid-19, and he praised the NHS saying he had been “very,very lucky” but “thousands of people have been less fortunate than I was”.

With the death toll having exceeded 26,700 and under pressure to detail a blueprint for easing the lockdown, the PM said: “We are past the peak and on the downward slope.

“I will be setting out a comprehensive plan next week to explain how we can get our economy moving, our children back to school and into childcare, and thirdly how we can travel to work and make life in the workplace safer.

“In short, how we can continue to suppress the disease and at the same time restart the economy.”

However, the PM cautioned that the timing around relaxing individual restrictions would depend on “where we are in the epidemic” and what the data suggests.

England’s chief scientific adviser Sir Patrick Vallance said the number of people being admitted to hospital across every region in England still needs to be decreased.

But he added: “The number of new cases is down, that’s turning into fewer admissions, fewer people in hospital, fewer people in intensive care and we’re beginning to see that decrease in deaths.”

The PM stressed that the R value – the number of people that one infected person will pass the virus on to – needs to stay under one to avoid Covid-19 taking off again at speed.

Testing will be key in any effort to ease restrictions, and the public may find out on Friday if the Government reached its target of carrying out 100,000-a-day by the end of Thursday.

In particular, contact tracing will be key in suppressing the R value by identifying individuals who may have become infected and ensuring they isolate themselves before spreading the virus any further.

Public health professor Gabriel Scally was highly critical over the Conservative austerity programme for having “emaciated” the system from being able to carry out the extensive testing programme required.

“The resilience has been stripped systematically out of the system, you cannot, when a big problem like this hits, you can’t just reinvent things and put them back the way you wish they were,” he told BBC Newsnight.

Francis Crick Institute geneticist Sir Paul Nurse was highly-critical of the target, dismissing it as a “bit of a PR stunt” and calling for a more comprehensive programme.

“Testing was absolutely critical, it hasn’t been handled properly,” he added on Question Time.

The latest daily figures show 81,611 tests on 54,575 people have been carried out, though a time lag in reporting suggests it could be a few days before it is known whether the target was met.

At the press conference, Mr Johnson warned a second spike in cases must be avoided not just because of the death toll it would bring, but because of the potential to inflict even worse “lasting economic damage”.

“That’s why we have to calibrate our measures so carefully and make sure we not only unlock the economy gradually, but also find ways of continuing to suppress the disease, and possibly find new, more ingenious ways of suppressing the disease,” he added.

He signalled that the use of face coverings could be advised as the nation eases itself out of lockdown, saying: “I do think that face coverings will be useful both for epidemiological reasons but also for giving people confidence they can go back to work.”

The latest figures from the Department of Health and Social Care show that 26,771 people have now died in all settings with coronavirus, an increase of 674 on the number announced on Wednesday.

The new death toll came as:

– Senior NHS England director Professor Keith Willett said care homes will become “the epicentres of transmission” for the next few weeks, according to the Independent

– The nation applauded NHS workers for the sixth Thursday in a row, with the PM’s fiancee Carrie Symonds saying she has “another wonderful reason” to applaud the health service a day after she gave birth.