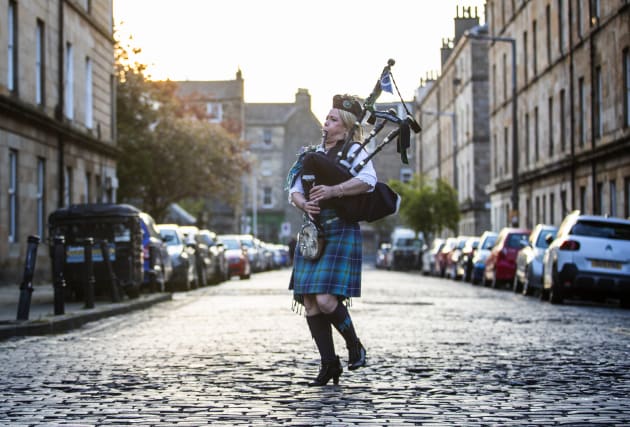 A piper has paid special tribute to Captain Tom Moore by playing a rendition of Happy Birthday during the latest Clap for Carers.

The Second World War veteran has raised more than £31 million for the NHS – having set out to walk 100 laps of his garden in Marston Moretaine, Bedfordshire, before his 100th birthday today.

People across the country have found unique ways to pay tribute to the fundraising centenarian – now an honorary colonel – including piper to the Lord Provost of Edinburgh, Louise Marshall.

Often referred to as Scotland’s National Piper, Ms Marshall has been playing her bagpipes during every Clap for Carers so far.

But she wanted to join the rest of the country in adding a special tribute to Captain Tom, telling the PA news agency: “It was really special, absolutely.

“This is my sixth week or so because I played the week before lockdown as well. I get so much amazing feedback.

“Especially because it was ‘Colonel’ Toms’ birthday I thought I would play Happy Birthday for him.

“Everybody sang along and the rain stopped just in time as well. It was absolutely perfect.”

Ms Marshall has become a popular fixture among the residents of Leith, with many now giving requests about where to pipe next.

Videos of her on the I Love Leith Facebook page have been viewed around the world.

She said she was proud to play for Captain Tom, adding: “Everybody’s staying completely safe and expecting me to play. And I am going to play anyway.

“I’ve just had so many comments online. A lot of people say it’s the highlight of the week.

“It’s sort of getting longer and longer – I think it lasted about 25 minutes tonight.

“In fact I just got a message saying ‘thanks for raising the spirits of Leith’. I’ll keep doing this until the lockdown’s over.”

Corbyn allies call for unity in Labour Party after suspension

Protesters clash with police over Covid-19 restrictions in Barcelona