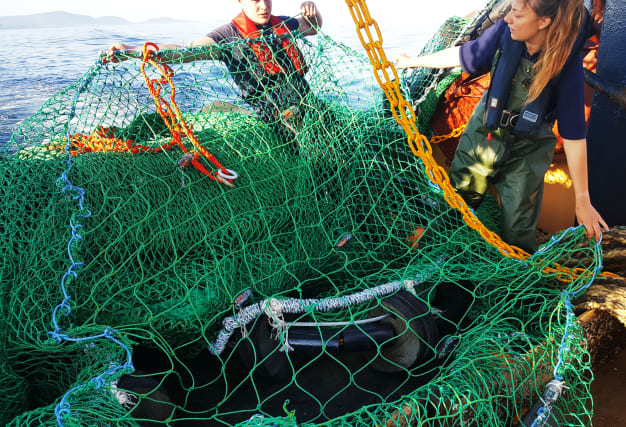 A simple technique to “illuminate the exits” in trawl fishing nets can reduce unwanted bycatch by almost 50%, new research has found, potentially protecting both the environment and fishermen’s livelihoods.

The research, published in Journal of the Marine Biological Association of the United Kingdom, inverts an old fishing technique of shining a light on water to attract fish into a net to boost the catch.

The study, which was conducted between June and August 2017, tested the impact of lights in reducing the number of haddock and flatfish caught  in a queen scallop fishery off the Isle of Man.

It found that while existing bycatch reduction devices were effective at shallower depths of 29 metres to 40 metres deep, in deeper darker waters of 45m to 95m, they had no impact at all on bycatch numbers.

Bycatch is a problem in fisheries all over the world because it inflicts further damage on often depleted non-target species, and kills mammals and seabirds that become entangled in nets.

It can also be a huge cost to fishermen – under EU law, the Landings Obligation requires fishermen to bring ashore almost everything that they catch, including fish that are not part of their quota.

If they end up catching too much of their non-target species, fishermen can see their fishery “choked” – closed for a period of months to allow vulnerable stocks to recover.

Lucy Southworth, lead author of the study, told the PA news agency: “Traditionally, and this goes back decades and maybe even centuries, fishers used lights to attract fish.

“But now we are turning that on its head to try and manipulate the behavioural responses in fish and other animals to either repel them away from gear or to manipulate their behaviour so they can escape from them net.”

She added: “In our case we decided to attach the lights to the escape exit to try and guide fish towards it so they would escape out more so than they would do if the lights weren’t there.”

Ms Southworth described the discovery that existing bycatch reduction devices without LEDs cease to work at greater depth or at night “very worrying”.

It means fishermen trying to comply with best practice are still at risk of seeing their fisheries closed early, and potentially causing significant unintended environmental damage.

The research team thinks the LED solution could prove very popular with fishermen because the lights are relatively cheap, easily applied to existing nets and reconfigured for different environments.

Separate research conducted in Peru has already shown LED lights can reduce the numbers of seabirds entangled in gill nets, and is trying to establish if it can help protect turtles.

Anecdotally, the team conducting the research in the Isle of Man found evidence of escapement of shark bycatch and think it could be an area for further research.

It could potentially reduce the numbers of dolphins, whales and porpoises killed in fishing nets in UK waters every year.

The lights might help alert marine mammals to the presence of nets – particularly gill netting, which forms a wall across the seabed – helping them to avoid them.

The study worked with lights supplied by the UK-based start-up SafetyNet Technologies.

Morven Robertson, senior UK projects manager at the Blue Marine Foundation, welcomed the research, saying: “We look forward to seeing how this technology can help fishermen to reduce bycatch, avoid choke species and fulfil commitments to the landings obligations.”

Samuel Stone, head of fisheries and aquaculture at the Marine Conservation Society, said: “This is really exciting and exactly the kind of innovation we need to see more of to reduce bycatch in our fisheries.”

He added: “We’d love to see more funding for innovations like this, but policy incentives from governments are also really important.

“Offering things such as extra quota and access to certain areas  when approved selectivity devices are being used could really help incentivise widespread use.”

“We hope that fishing fleets take heed of this scientific development to help them reduce their bycatch, and step up their measures to eliminate it as much as possible,” he said.

“But to give our oceans the best chance of recovery, we need to see catch limits set at sustainable levels, in line with scientific advice.

“We also must place at least 30% of our oceans off limits to human activity, including fishing, by 2030.”

Marine biologist Rob Deaville, head of the UK’s Cetacean Strandings Investigation Programme, welcomed the research but was cautious of what it might mean for marine mammals, saying further research was needed.

“Meanwhile, our existing options to mitigate cetacean bycatch remain limited and we must do more to improve the availability of potential tools to address this significant issue,” he said.