Uplifting news: A lockdown marathon and a lawn-art tribute to the NHS 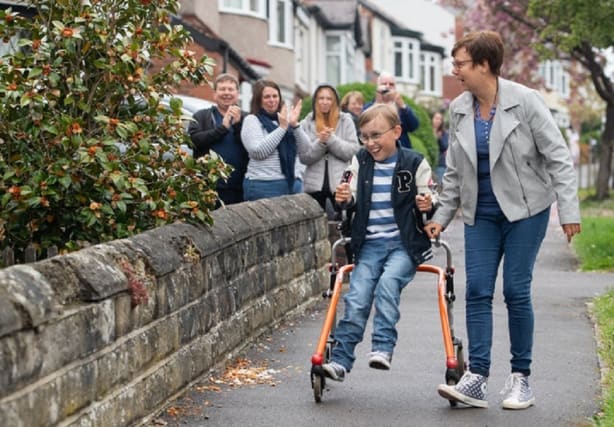 A nine-year-old boy with cerebral palsy and autism has pledged to walk a marathon, while a lottery winner has mowed an NHS logo into his lawn in Wednesday’s uplifting news.

A nine-year-old boy with cerebral palsy and autism says he is determined to copy the fundraising exploits of Captain Tom Moore after he reached the half-way point in his challenge to walk a lockdown marathon.

Tobias Weller has been dubbed Captain Tobias by friends and neighbours who come out in their dozens to watch him complete 750 metres each morning, using his walker in his street in the Beauchief area of Sheffield.

Tobias has raised over £15,000 for Sheffield Children’s Hospital and Paces School, and intends to add thousands more before his challenge is complete at the end of May.

“I saw Captain Tom and he was using his walker, I think he’s awesome,” Tobias said. “Yesterday I reached the half-way point – that’s 21,100 metres. It was amazing. The whole street came out to clap me.

“It’s a very long way to walk, but I am finding it a bit easier every day.”

A lottery winner whose father died after contracting coronavirus has mowed an NHS logo and rainbow into his lawn in tribute to those who helped care for his dad.

Sue Richards and Barry Maddox, of Billericay in Essex, won £3 million on a National Lottery scratchcard in 2016.

Mr Maddox said: “Losing him has left a huge hole in our lives, but we know that he’d want us to keep enjoying life and to always be grateful for what we’ve got.

“This bit of lawn mowing is our way of saying thank you to the NHS for all they have done for our family, and for so many other families.”

An endangered wild horse has been born at ZSL Whipsnade Zoo in Bedfordshire as the centre is closed to the public due to the ongoing coronavirus lockdown.

Zookeepers have shared the first images of the newborn Przewalski’s foal, a species once declared extinct in the wild.

The female foal, who will be named by zookeepers in the horse’s native habitat of Mongolia, was born to mother Charlotte and father Nikki on April 13.

Mark Holden, team leader at the zoo, said: “The birth of a Przewalski’s foal is a real cause for celebration.

“It’s really sad that we can’t share our excitement with visitors right now, but the birth of this endangered foal is another example of the incredibly important work we do.”

– Virtual Dublin Pride Festival to be held in June

Dublin LGBTQ Pride celebrations will this year take place virtually after the annual parade was cancelled.

The parade had initially been postponed until September, but organisers said the scale of the event would “place unnecessary pressure on essential frontline services and resources that will have been at full stretch for many months”.

In a statement, organisers said: “The first Digital Dublin Pride Festival is to be hosted in June, with a fully interactive virtual Pride Parade and concert.

“Buildings will still light up for Pride, flags will be flying high across the city and our community will still be there to support each other.”

A train has been named after Captain Tom Moore in honour of his fundraising achievements during the coronavirus pandemic.

The Second World War veteran raised more than £29 million for the NHS by walking laps around his garden ahead of his 100th birthday on Thursday.

The Great Western Railway intercity express train 800025 will go into service, carrying key workers to and from work.

Interim managing director Matthew Golton said: “With his indomitable spirit, what Captain Tom has achieved is truly inspirational and an example to us all.

“We at Great Western have a long history of naming trains after Great Westerners, the past and present heroes from across our network, and I am honoured that today we can respond to requests to have a train named after Captain Tom Moore.”