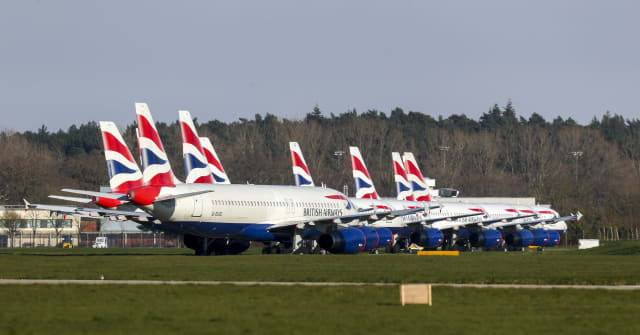 Unions have vowed to fight plans to cut 12,000 jobs at British Airways amid anger at the “heartless decision”.

Officials said the move is “entirely at odds” with the course of action followed by other European carriers as they seek a way through the coronavirus crisis.

And Labour said the Government could have done more to avoid such a drastic cut.

Unite general secretary Len McCluskey said: “This devastating announcement comes on the day that BA staff joined together to lay to rest one of their own, a long-standing and much-loved cabin crew member who tragically died from the coronavirus, contracted while carrying out his duties bringing home loved ones from overseas to reunite concerned families.

“This announcement will be felt as the stab in the back it undoubtedly is by the close-knit BA family.

“We say to BA’s boss, Alex Cruz, that this is a heartless decision in a time of national crisis.

“With the majority of BA’s workers on furlough, we would have expected him to work with both us and the Government to honour the spirit of the Government’s job retention scheme.

“Governments across Europe, in Spain, Germany and France are working with trade unions and airlines to rebuild the industry, keeping people in work while the sector recovers.

“To reject government support but then expect their own staff to pay the cost of such a misjudgment is irresponsible, dangerous and destructive and is utterly at odds with the mood of the country at a time of crisis.

“This workforce has worked tirelessly, heroically and unnoticed throughout this crisis, in dangerous circumstances on the global transport front line.

“They simply do not deserve to be treated as a commodity to be disposed of in this way.

“Unite values their sacrifice, as do the families that they have brought together, and can be assured that their union will not tolerate this indecent mistreatment of these brave men and women.”

GMB national officer Nadine Houghton said: “We believed we had reached some relative, albeit temporary, respite for our members following the agreement to furlough 80% of BA’s staff.

“I know our reps will work day and night to limit the impact on our members but 12,000 employees is a staggering number.

“All our efforts will be put into bringing that number down.”

Brian Strutton, general secretary of pilots’ union Balpa, said staff are “devastated” by the announcement, adding: “This has come as a bolt out of the blue from an airline that said it was wealthy enough to weather the Covid-19 storm and declined any Government support.

“Balpa does not accept that a case has been made for these job losses and we will be fighting to save every single one.”

Shadow transport secretary Jim McMahon said: “The Government should have stepped in sooner and done more to protect their jobs.

“The aviation industry is critical to the UK economy but workers should not be being laid off by those at the top who have reaped the rewards from their hard work.”