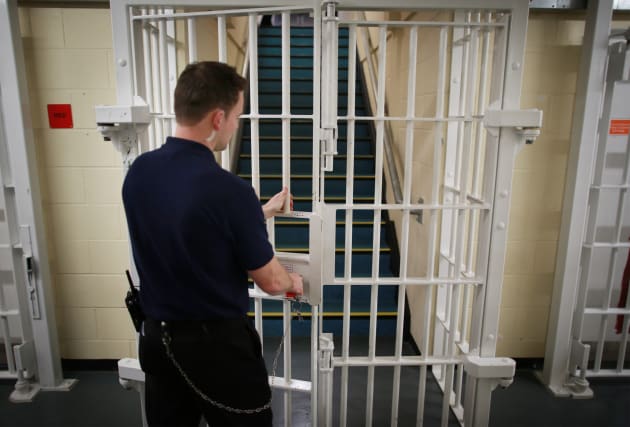 The UK prison system is in “deep crisis”, with violence, drug problems and overcrowding prevailing in male prisons, according to a report.

The “infliction of unjustified violence by staff on prisoners” was particularly “deeply concerning”, the Council of Europe’s Committee for the Prevention of Torture (CPT) said.

The “evolution” of an informal practice of preventive strikes – where prisoners who are behaving are punched so they do not become a threat in future – was of “utmost concern”, according to the report.

“Alarmingly high levels of substance use” were also of “deep concern”.

The committee inspected Doncaster, Liverpool and Wormwood Scrubs prisons as well as Feltham A and Cookham Wood young offender institutions in May last year.

Although there had been some progress since 2016, the committee found problems remained.

The report said: “There is now a clear acknowledgement at the highest political level that the lack of safety in prisons and the persistently high levels of violence are unacceptable and urgently need to be tackled.

“Nevertheless, the ineluctable fact remains that the prison system is in deep crisis.”

Inmates were “enduring restricted and isolating regimes and/or long periods of segregation”.

Levels of violence between inmates, attacks against staff and force used against prisoners had reached “record highs”.

The report said: “A new and deeply concerning finding was the infliction of unjustified violence by staff on prisoners in namely Liverpool and Wormwood Scrubs; of utmost concern was the evolution of an informal practice of ‘preventive strikes’ – ie: “preventively” punching compliant prisoners whom staff perceived might, at some point in the future, become a threat.

“For a prisoner officer to strike a fully compliant prisoner is totally unjustified.”

In young offender institutions, episodes of violence were being tackled “by a very frequent resort to the use of force and restrictions on the movements” with some officers on occasion resorting to “pain-inducing techniques which should be abolished in law and practice.”

Drug taking was “omnipresent” in the establishments visited, most notably in Doncaster where the “smell of drugs wafted along the corridors even in plain daylight.”

A prisoner was spotted smoking NPS (Novel psychoactive substances also previously known as legal highs) openly and was not challenged.

Prisoners “pleaded with the delegation to ask the prison management to crack down on the drug-taking at night as the smell and fumes permeated the cell vents of other prisoners, contributing to ‘passive smoking’ in their small enclosed cell spaces.

“Convulsive fits or worse due to NPS overdoses were common as the delegation observed for itself.

The “pernicious effects of drugs” in prompting violence and a rise in health treatment was “evident”.

– High numbers of prisoners with mental health conditions and a “considerable” number who had self-harmed in the past year. Several inmates with “severe mental health disorders” were segregated rather than being treated in hospital.

– Many staff in the prisons working under immense pressure in challenging circumstances. Notwithstanding a recruitment drive to hire 3,000 new prison officers since 2016, the retention rate remained an issue of concern and the actual numbers of staff in direct contact with prisoners in accommodation areas had not changed significantly.

The prison system in England and Wales “continues to suffer from chronic overcrowding”, the CPT said, with the population more than doubling since 1990 and most adult jails operating well above normal capacity.

The committee said the solution “is clearly not for the United Kingdom to build its way out” as it called on the Government to take action to address the problem.

Peter Dawson, director of the Prison Reform Trust, said: “This is a deeply shaming report.

“It shows how far below the standards of a civilised country our prison system has fallen.

“While attention is naturally focused on managing the immediate crisis, this searing account highlights the reasons why that task has been made exponentially more difficult, and why we should never return to ‘business as usual’ in our prisons.”

A Ministry of Justice (MoJ) said it would not hesitate to instigate disciplinary proceedings for the inappropriate use of force or report the matter to police where appropriate, adding that any unlawful force against a prisoner was unacceptable.

A spokesman added: “This Government has made its commitment to safe, secure and decent prisons very clear.”