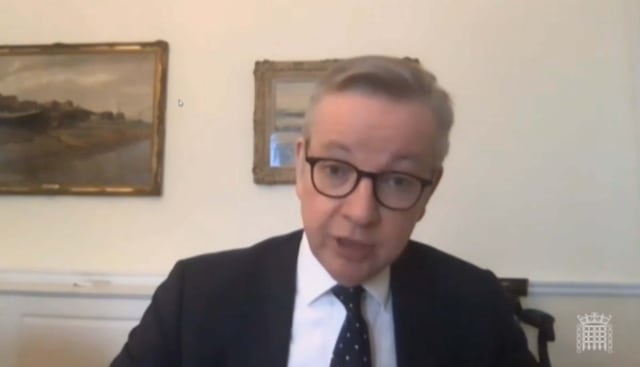 Michael Gove said the Government was anxious people would act in a “cavalier” way if told to wear masks to prevent the spread of coronavirus.

It comes after Scotland First Minister Nicola Sturgeon recommended people wear face coverings in places where staying two metres apart from others was difficult, such as when using public transport and visiting shops.

But the rest of the UK is continuing to follow advice that covering their face is not required, with chief scientific officer Sir Patrick Vallance previously declaring that the evidence relating to masks helping prevent transmission was “quite weak”.

Cabinet Office minister Mr Gove told the Commons’ public administration and constitutional affairs committee: “The scientific evidence so far says face coverings can have an effect in preventing an individual from spreading the disease to others if they have it and are asymptomatic.

“But there is also a worry that some people may think that wearing a mask protects themselves, as distinct to protecting others, and therefore they may behave in a manner that is slightly more cavalier.

He confirmed the Cabinet was continuing to keep the current advice “under review”.

– Gave the nod for lockdown easing to take place on some island communities in the UK as a way of piloting how it could happen in the rest of the country.

– Confirmed Cabinet Office staff working on preparing the UK for exiting the transition period with the European Union had been seconded to assist with the Covid-19 response.

– Admitted ministers held secret data on how well social distancing was being followed by the public.

– Defended the UK currently having one of the world’s worst death rates, saying the country had more “social mixing” than others.

Mr Gove, appearing via webcam, told the committee on Wednesday that some “island communities” could be used to pilot easing measures for scaling back the lockdown.

The Chancellor of the Duchy of Lancaster made the comments in reference to how the devolved administrations might take a different approach to dealing with the coronavirus crisis.

He said: “My own personal view is that it is preferable if we do it (lift the lockdown) as one United Kingdom.

“But there is a specific scientific justification for saying that island communities can be areas where you could pilot some measures, contact tracing in particular, in order to combine that with relaxing measures at a progressively greater rate.

“That can help you judge what is right for the country overall.”

The former justice secretary confirmed to MPs that ministers had access to data on how well the public was abiding by the strict social distancing rules imposed last month, but said the information could not be published due to confidentiality issues.

“Some of the social distancing compliance measures are not shared because the means by which we gather that information involves some quite sensitive relationships,” he added.

Addressing questions about the scale of coronavirus-related deaths being experienced by the UK, Mr Gove said there were “factors” at play for why the mortality rate was high.

Once care home and community deaths are added to hospital casualties, the UK is only behind the US in terms of the number of Covid-19 deaths.

Analysis by the PA news agency showed some 24,899 deaths involving coronavirus have been formally registered across the UK, though the true toll is thought to be far higher.

Mr Gove said: “If we look at the United Kingdom, there are factors here and facts which should be kept in mind, although they are not definitive, which are important when we think about the spread of the disease.

“One of the things we know about the disease is that it spreads through social mixing and it appears to spread faster in cities.

“If you have an open dynamic, multicultural, multi-national, free trading nation like the United Kingdom, and you also have significant cities of the size of London, Birmingham, Manchester and Glasgow, then it is the case that you are likely, on the basis of what we know so far, to have a faster rate of re-infection than in other countries.”