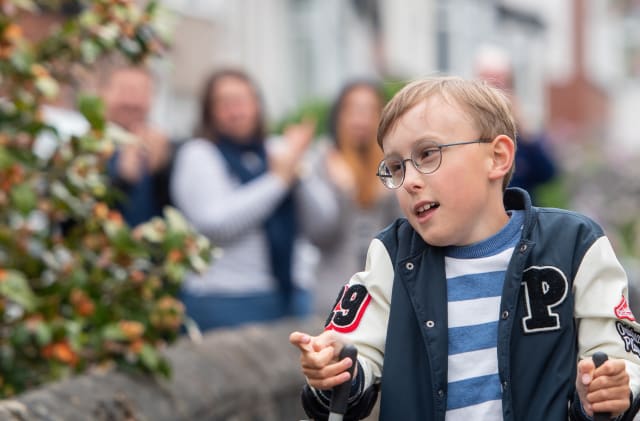 A nine-year-old boy with cerebral palsy and autism says he is determined to copy the fundraising exploits of Captain Tom Moore after he reached the half-way point in his challenge to walk a lockdown marathon.

Tobias Weller has been dubbed Captain Tobias by friends and neighbours who come out in their dozens to watch him complete 750 metres each morning, using his walker in his street in the Beauchief area of Sheffield.

Scores of families greet Tobias at the same time each day, clapping and cheering his progress and waving placards urging him on.

Inspired by Captain Tom’s exploits, Tobias has already raised almost £15,000 for Sheffield Children’s Hospital and Paces School – his special school in the city – and intends to add thousands more before his challenge is complete at the end of May.

“I saw Captain Tom and he was using his walker, I think he’s awesome,” Tobias said.

“Yesterday I reached the half-way point – that’s 21,100 metres. It was amazing. The whole street came out to clap me.

“It’s a very long way to walk but I am finding it a bit easier every day.

“I love it when people are clapping and cheering. It motivates me to walk even further.”

His mother Ruth said: “When we were first on lockdown we knew that Tobias had to do physio every day so, in order to get in a routine, we started walking every day.

“And then people started coming out and clapping and cheering him. So we thought, why don’t we have a target and a marathon’s the gold standard?

“Then Tobias saw Captain Tom on the TV and thought, ‘I can do that – he’s got a walker, he’s walking a long way and he’s walking for charity. And I want to do that as well’.”

Teacher Ms Garbutt said: “It’s hard, particularly because we’re on a hill. You can’t get away from the fact that we live in Sheffield so we’re going to be on hills.”

The money raised will help the Children’s Hospital Charity through its emergency Covid-19 appeal and Paces School, a non-maintained special school where the ethos is on children being challenged to reach their full potential.

Ms Garbutt said Tobias loves going to the hospital, where he had his first operation when he was three weeks old.

Another Pace School pupil – Lennie Street, eight, from Leeds – is also undertaking a challenge to raise money during the lockdown.

Lennie, who has cerebral palsy and hydrocephalus and cannot stand or walk independently, is learning 100 songs on the piano over the next month.

Paces, based in High Green, is trying to raise £3.5 million towards a new state-of-the-art facility which will be a national centre for conductive education.

Head of fundraising Julie Booth said: “We are extremely proud of Tobias and Lennie for taking on such huge challenges to support Paces. They are absolute stars.”

Abbie Pervin, regional fundraising manager at the Children’s Hospital Charity, said: “We want to say a huge thank you to Tobias from everyone at Sheffield Children’s for taking on this amazing challenge.

“He is such an inspirational youngster, wanting to push himself and raise money for his two favourite charities.”

Lennie’s fundraising page is at justgiving.com/campaign/Lenniestunes