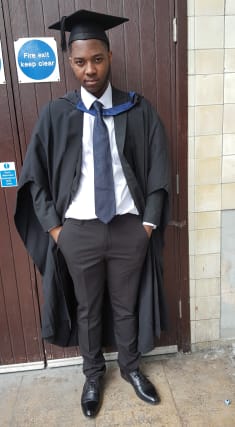 Police investigating the murder of an NHS worker seconds from his home have released an image of a stolen car used by the killers.

Investigators are looking for witnesses who saw a silver Dodge Caliber found abandoned minutes after the stabbing, half a mile away in Lincoln Road, Plaistow.

It had fake number plates and was seen being driven through a no entry sign from Cumberland Road.

The car, which was stolen in Dagenham on April 16, was distinctive because it had a temporary wheel on the front passenger side.

Police are appealing for anyone who saw the car or may have dashcam footage of it, before or after the attack, to come forward.

Marketing graduate Mr Gomoh worked for the NHS, as does his mother Marian Gomoh, who is the labour ward matron at Newham University Hospital.

The family have been hit by a double tragedy after David’s father, who had Covid-19, died on April 7 from a cardiac arrest.

An appeal has been set up on GoFundMe to help the family with funeral costs.