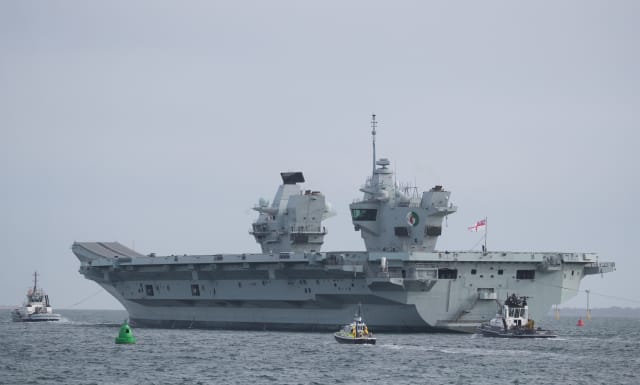 The 65,000-tonne warship had been expected to sail from Portsmouth Naval Base at the start of the week, but the departure was delayed to enable the ship’s company to be tested.

The carrier will now enter a period of quarantine at sea to ensure that all of the crew are clear of the virus.

Concerns were raised after more than 600 members of the crew of a French aircraft carrier and accompanying vessels tested positive for coronavirus, while the US Navy said a sailor died after testing positive for Covid-19 on the USS Theodore Roosevelt.

And shadow defence secretary John Healey called for the military to be tested and for large-scale training exercises to be postponed to protect personnel.

A Royal Navy spokesman said: “While many Royal Navy and Royal Marine personnel from the regular and reserve forces remain ashore supporting, the current national fight against Covid-19, the ship’s company of HMS Queen Elizabeth are focused on ensuring that UK Defence remains prepared for future global threats.

“All personnel sailing with the ship, have undergone testing for coronavirus.

“As a further precaution, HMS Queen Elizabeth will conduct a period of isolation at sea, before she starts her training with the Flag Officer Sea Training (Fost) staff.

“She will be operating in waters close to the UK coast and the commanding officer has the discretion to cease the training, if deemed necessary.”

Defence secretary Ben Wallace told MPs last week that he had given all ships’ captains in the Royal Navy full authority to return to port, come alongside or evacuate if they had an outbreak on board.

He said: “In the case of Queen Elizabeth, I have spoken to the captain directly myself and said we will not judge you, we will not think any the worse of you if when you are at sea you feel the need to come back because of a crew outbreak.

“I have also said to the First Sea Lord, you must justify in writing why it is necessary to put to sea.”

The Queen Elizabeth is sailing for a period of sea training and carrier training around the south coast to help prepare it to be in a position to declare carrier strike capability later this year ahead of its first deployment planned for early 2021.

The training will include the UK Lightning fighter jet crews which will practice manoeuvres on its flight decks.

The navy spokesman said: “HMS Queen Elizabeth has sailed from Portsmouth today to ensure she is ready to conduct her first operational deployment in 2021.

“She will undergo several weeks of training and assessment with the staff of
Fost to ensure the UK can deliver on its commitment to have a Carrier Strike Group ready to deploy from the end of this year.”