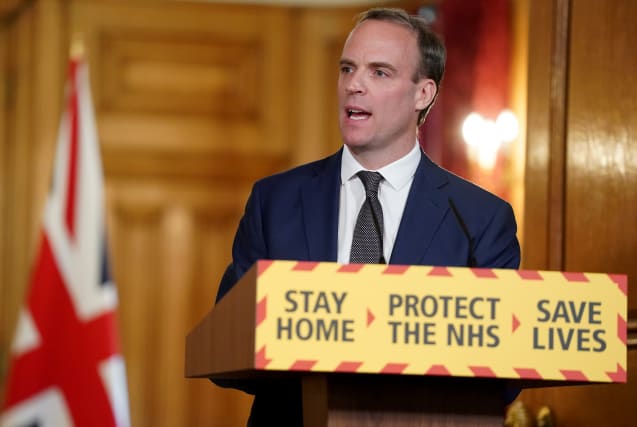 More than 20,000 Britons have been brought home on 99 Government-chartered flights from 21 countries since the start of the coronavirus pandemic, the Foreign Office said.

Some 2,000 people have been brought back from South Africa and around 1,200 from Peru, the Government said.

Further charter flights are planned in the coming days, including another 28 from south Asia before May 4 and another picking up passengers in Guyana and Argentina.

Speaking at the Downing Street daily briefing on Wednesday, Foreign Secretary Dominic Raab acknowledged that “the job isn’t yet done” and pledged to “continue with this unprecedented effort”.

Mr Raab went on to say that the Foreign Office (FCO) has worked with airlines and foreign governments to help 1.3 million people return to the UK on commercial flights.

He added that his department faced a “daunting task” to return 19,000 British passengers on cruise ships around the world, but “stuck at it” to ensure everyone was repatriated.

The £75 million operation to charter flights from destinations where commercial routes have been severed was launched by the FCO on March 30.

Foreign Office minister Nigel Adams earlier told the Commons that around 50,000 British nationals are believed to be still stranded abroad.

“There are some lessons to be learned from this situation,” Tory Anthony Mangnall said, addressing Mr Adams.

“I ask that the minister might consider that the Foreign Office performs a retrospective analysis of how we have repatriated British citizens and presents that report to this House so that we may be able to scrutinise it in future – because I think those shortcomings will need to be addressed.”

The SNP’s Foreign Office spokesman Alyn Smith added: “Can the minister commit to an inquiry into the FCO handling of this issue in due course so that we can learn lessons for the future, not least focusing on the issue of de-funding of the FCO network, which has left it really at a loss that it didn’t have the capacity to cope?”

Mr Adams said “no doubt this will be something that we do look at in the cold light of day”, but that he believes his department has “done a pretty good job” so far.

“Of course we learn from it, every day we learn the lessons from such a huge operation,” he said in a statement in the Commons.

“This is something we’ve never faced before, the nearest we’ve come to it is the Thomas Cook repatriation not too long ago.

“We learn lessons from that, but this is on a scale that is unimaginable. Never before have we had to repatriate this many people, over 1.3 million people have got come via commercial routes.”