Chainmail from Mary Rose made of modern-style alloy 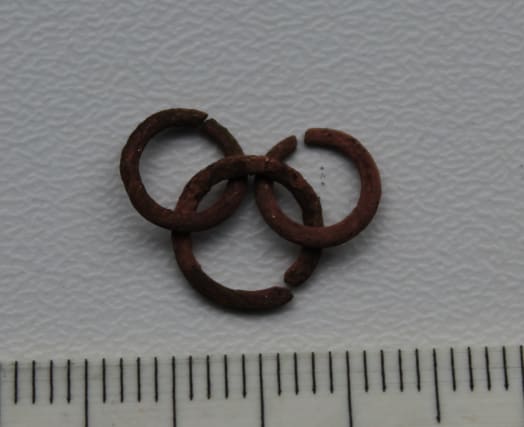 Chainmail worn by the crew of Henry VIII’s flagship the Mary Rose was made up of a modern-style alloy composition, according to a study.

Scientists from the University of Warwick used a state-of-the-art X-ray facility to analyse three brass links recovered from the wreck of the Tudor warship in the Solent, off Portsmouth.

The researchers used X-ray Materials Science (XMaS) beamline technology to examine the surface chemistry of the links and found they were manufactured from an alloy of 73% copper and 27% zinc.

Emeritus Professor Mark Dowsett said: “The results indicate that in Tudor times, brass production was fairly well-controlled and techniques such as wire drawing were well developed.

“Brass was imported from Ardennes and also manufactured at Isleworth. I was surprised at the consistent zinc content between the wire links and the flat ones.

“It’s quite a modern alloy composition.”

A university spokesman said: “The exceptionally high sensitivity analysis revealed traces of heavy metals, such as lead and gold, on the surface of the links, hinting at further history to the armour yet to be uncovered.”

Prof Dowsett added: “The heavy metal traces are interesting because they don’t seem to be part of the alloy but embedded in the surface.

“One possibility is that they were simply picked up during the production process from tools used to work lead and gold as well.

“Lead, mercury and cadmium, however, arrived in the Solent during WW2 from the heavy bombing of Portsmouth dockyard. Lead and arsenic also came into the Solent from rivers like the Itchen over extended historical periods.

“In a Tudor battle, there might be quite a lot of lead dust produced by the firing of munitions. Lead balls were used in scatter guns and pistols, although stone was used in cannon at that time.”

The Mary Rose sank in the Solent in 1545 during a battle with the French. The remaining part of the hull was raised from the seabed in 1982 and is on display with thousands of artefacts in Portsmouth.