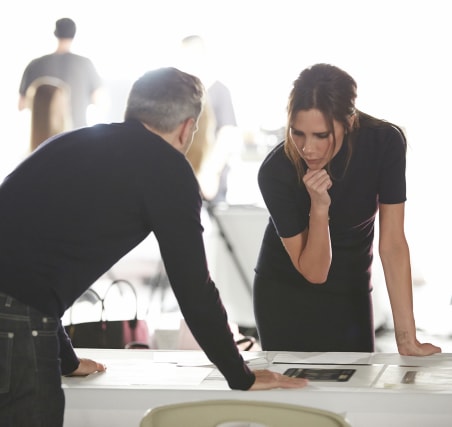 Victoria Beckham’s clothing brand is being sued by a former employee who allegedly suffered a hand injury.

She allegedly worked up to 15 hours a day for seven days a week in the run-up to New York Fashion Week, handling heavy fabrics and equipment.

Eventually, she needed surgery and has been left barely able to open her handbag, it was claimed.

On Tuesday, Natasha Moyeed, from Slater and Gordon, said: “Kristina worked for Victoria Beckham Limited from November 2011 to August 2019 and absolutely loved her job working at the London studio in Hammersmith.

“She was a pattern cutter and very good at this job, but because she was good she was tasked with working for long periods and with heavy fabrics.

“It was these repetitive, awkward and sustained movements which cause carpel tunnel syndrome to advance rapidly in her hands and wrists.

“When I last saw her she could barely open her handbag.

“She is unable to work and has had to undergo surgery to have any kind movement in her hands.”

Ms Moyeed said her client’s job had involved lifting rolls of fabric, weighing between 44lb (20kg) and 77lb (35kg), then laying out and pinning the fabric to patterns.

Once pinned, she would shrink the fabric with a heavy industrial iron, said Ms Moyeed.

The whole procedure would take 30 to 60 minutes.

Ms Kubiliene would then cut the fabric, which required significant pressure and accuracy, holding with her left hand and cutting with her right, which took up to three hours.

Her lawyer said: “Normally she worked 10am to 6pm, but twice a year for two weeks she attended New York Fashion Week.

“For a month beforehand her workload increased to up to 15 hours a day, seven days a week, without regular breaks or rest.

“During these times her hands and wrists were so sore she needed painkillers to work.

“Victoria Beckham Limited failed to put measures in place to look after Kristina and prevent this from happening.”

Last year, Ms Kubiliene had an operation to relieve her carpel tunnel syndrome.

But she could not work after the surgery and she left her role.

Ms Moyeed said: “She is still unable to work and has such a weak grip she needs help around the home to do basic tasks.

“It is not known when, if ever, she will be able to return to a similar role, or any kind of employment.

“Kristina does not wish to make any further comment at this time.”

The PA news agency has contacted Victoria Beckham Limited for a response to Ms Kubiliene’s claims.

Victoria Beckham founded her fashion label in 2008 and it became known for its modern minimalism.

With offices in London and New York, a flagship store in Mayfair and another store in central Hong Kong, the brand has won critical acclaim alongside multiple industry awards, including Best Designer Brand and Brand of the Year at the British Fashion Awards.

In addition, victoriabeckham.com, the Victoria Beckham brand is carried in more than 450 stores in 50 countries worldwide, according to the company website.