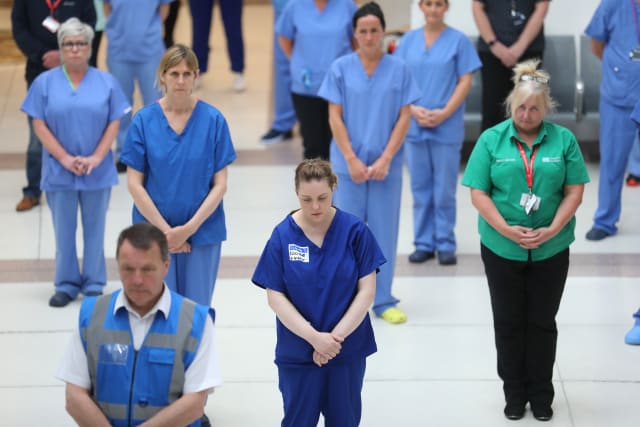 The full impact of Covid-19 on the UK is set to be revealed as the Government prepares to unveil the combined number of daily deaths in hospitals, care homes and the community linked to the killer virus.

There is currently an 11-day time lag for the Office of National Statistics’ (ONS) data on the number of people who have died in care homes and their own homes after contracting coronavirus.

But Health Secretary Matt Hancock said the public would receive up-to-date figures to go alongside the number of hospital deaths as of Wednesday, while the Department of Health and Social Care said figures dating back from early March up to April 28 would also be declared.

A Government graph comparing the nation’s death rate to countries across the world indicated that, once community and care home deaths were factored in, the UK could end up with the highest casualty rate in Europe.

It comes as 21,678 patients have now died in hospital after testing positive for coronavirus in the UK as of 5pm on Monday, up 586 on the day before.

Analysis by the PA news agency showed some 24,243 deaths involving coronavirus have been formally registered across the UK, though the true toll is thought to be far higher.

ONS figures released on Tuesday showed around three in 10 of all Covid-19 deaths are now occurring in care homes.

– Professor Sir David Spiegelhalter, a statistician at the University of Cambridge, said he believed more coronavirus deaths are occurring in care homes and at home than in hospitals.

– An NHS contact tracing app could be ready for deployment in the next three weeks, Mr Hancock confirmed.

– First Minister Nicola Sturgeon advised people in Scotland to use face coverings in places where social distancing is difficult, although the advice remains unchanged in England.

– More than 100 NHS and social care workers are now known to have died in the UK, according to analysis by PA.

Questions on care homes, the lockdown and the Government’s target of carrying out 100,000 Covid-19 tests per day are likely to be raised at Prime Minister’s Questions.

Number 10 refused to confirm whether Boris Johnson, who only returned to work on Monday following his close brush with coronavirus, would make an appearance.

Labour leader Sir Keir Starmer is due to talk with the Prime Minister over the phone later in the afternoon to discuss concerns over the lockdown.

It comes as Downing Street was forced to deny it had watered down requirements for allowing the lockdown to be lifted.

No 10 came in for questioning following Tuesday’s press conference after it was noted that its “five tests” for easing the lockdown featured altered wording, sparking speculation that ministers are preparing to lift some restrictions next week.

Rather than stating in test five that the Government had to be confident any adjustments would not “risk a second peak of infections”, the wording was changed to say no weakening of restrictions would be made that risked a second peak that “overwhelms the NHS”.

Mr Hancock has repeatedly said that the NHS managed to cope with the first peak of infections, which is understood to have occurred around Easter.

Asked about the alteration, No 10 insisted no change had been made to the tests and pointed to comments made by First Secretary of State Dominic Raab on April 16, in which he used similar phrasing.

The lockdown is due to be reviewed on May 7 and ministers are under pressure to lift some social distancing restrictions in order to kick-start the economy.

In a sign that the Government position could be softening, non-essential goods retailers were told click-and-collect services could continue to operate as long as customers do not have to enter stores to pick up their purchases.

“Stores can operate click-and-collect services as long as orders are taken online, by telephone or via post, and customers remain outside of the store to collect their goods,” said a Government spokesman.

Testing will be more widely rolled out, Mr Hancock has confirmed, to allow those who need to leave the house for work to be tested for coronavirus.

Furthermore, as part of a massive expansion of testing as the Government tries to hit 100,000-tests-a day by Thursday, the Cabinet minister said care home residents and staff, together with NHS patients and staff, can now get a test whether they have symptoms or not.

Older people over the age of 65 plus anyone in their households are also eligible, but only if they have symptoms.

Some 43,453 tests were carried out across the UK on Monday.