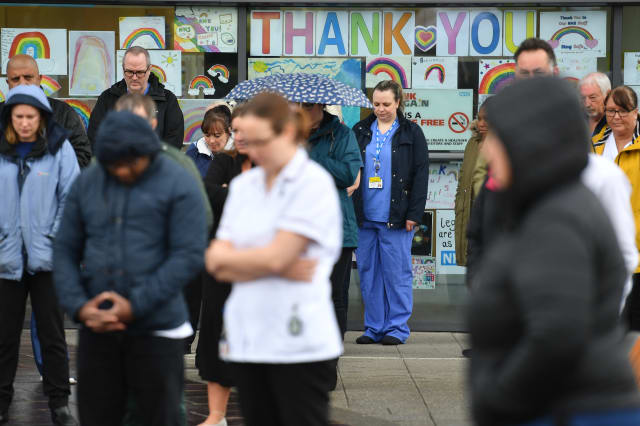 Loved ones of key workers who have died in the coronavirus outbreak said the nationwide minute’s silence gave them a moment to reflect on their losses.

Samina Haider observed the silence with her mother and brother in Romford, east London, and described it as a “humbling tribute”.

Her father, GP Syed Zishan Haider, had worked for more than three decades at Barking and Dagenham Clinical Commissioning Group.

The 79-year-old died in hospital on April 6 after testing positive for coronavirus.

Ahead of the silence, Ms Haider told the PA news agency: “It’s the first time, in a way, to be able to take stock of what’s happened.

“It’s a very humbling tribute and I think it’s important to do and it feels like, actually, at this point in time, our own personal grief is a nation’s grief as well, even though it’s for multiple people.”

But she highlighted issues with personal protective equipment (PPE) and a wider lack of funding for the NHS, adding: “We cannot lose sight of why we are having to do such a tribute in the first place.

“I’m so pleased that we are being able to acknowledge this minute’s silence, but there’s a bigger thing at stake here and we have to be able to question it and hold those accountable to why this has had to happen in the first place.”

Freya Trollope said she used the period of silence to reflect on her mother, who died on April 10.

Sara Dee Trollope was a 51-year-old nurse on Hillingdon Hospital’s mental health ward. The mother-of-four had previously met Prime Minister Boris Johnson on a visit to her hospital.

Her 18-year-old daughter told PA: “I respect everyone that took part in it, it was a nice gesture to do and personally, when I was in the minute silence zone, it made me reflect a lot on Mum and I knew she was looking down on me.”

Ms Ong said she was touched by the people who contacted her on Tuesday morning to say they would be taking part in the silence and that her mother was in their thoughts.

She said: “I thought it was very touching. I really appreciated that. I think it’s something, a small gesture.

“I think it was a nice touch that the whole nation decided that it would adhere to that minute’s silence.”

Her mother, who was 70 when she died, arrived in London from Hong Kong in the 1970s and worked for the health service for 44 years, until the day she fell ill.