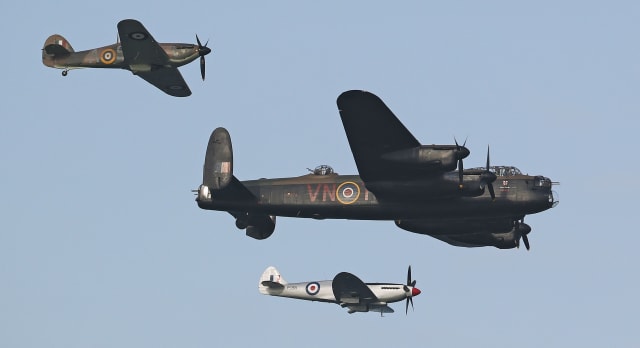 The Cabinet minister wrote on Twitter that the aerial salute was “meant to be a surprise for Tom”, but confirmed it would be happening after it emerged that his department rejected an earlier plan for a flypast organised by a Spitfire restoration company.

Captain Tom has raised £29 million for the NHS by walking laps of his garden ahead of his birthday.

But on Monday it revealed it had been denied permission for the flight by the Department for Transport, acknowledging that “current general aviation restrictions are in place to prevent non-essential travel”.

The firm said the RAF Battle of Britain Memorial Flight (BBMF) – which is based at RAF Coningsby in Lincolnshire and includes six Spitfires – is “not bound by the same restrictions”.

It added: “It is our understanding that they are now picking up the baton to provide a flypast for Captain Tom.

“Getting a Spitfire overhead for Captain Tom was always the primary goal and we’re thrilled that this may still be possible.

“We wish the BBMF team the very best of luck and hope that the weather permits a flypast on the 30th of April.”

Mr Shapps wrote on Twitter that the RAF flypast means Captain Tom will be honoured “in an even more significant way”.

A school in Bedfordshire has been flooded with more than 125,000 cards from well-wishers across the globe for Captain Tom’s birthday.

Famous names including the Duke and Duchess of Cambridge, Dame Kelly Holmes and England football captain Harry Kane were among those to send cards to Bedford School, where Captain Tom’s grandson, Benjie Ingram-Moore, is a pupil.

The 16-year-old said: “The volume of cards that have been sent to Granddad is just astonishing. So many of the cards are truly heartfelt, with thousands from young children who have taken the time to use their artistic talent and write a personal message.

“Another £60,000 has been generously donated via his birthday cards.

“It means a lot to Granddad as well as us as a family. We are hugely proud of how the nation has taken Granddad to its heart. Words can’t express how much I idolise him.”

Captain Tom was originally planning to mark his centenary with a family party but the celebrations have been put on hold due to the coronavirus pandemic.