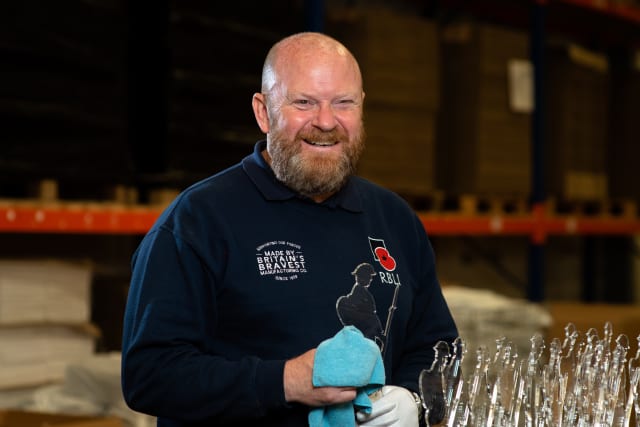 People in lockdown are being urged to show their support for this year’s coronavirus-hit VE Day commemorations by placing a specially designed image of a Second World War soldier in their windows.

Restrictions on movement and social distancing requirements have led to the cancellation of many plans to mark the 75th anniversary of victory in Europe on May 8.

More than 2,000 of the 25cm high perspex figures have been purchased so far, which were made by injured veterans in the RBLI’s social enterprise factory.

All money raised from the campaign will go towards the charity’s work to provide employment, training and support to veterans and their families.

The campaign has received the backing of the former head of the British Army General Lord Richard Dannatt, who said the Covid-19 crisis should not stop people marking the anniversary of the end of the war in Europe in 1945.

“Public mood is low, but we owe it to ourselves as a nation to recognise those who gave their lives in the Second World War, and also those who endured so much at home, to win us our freedom,” he said.

“I would hope that the country could draw a lot of strength from remembering the generations and all our relatives who pulled together at that time.”

General Lord Dannatt, who served as chief of the general staff from 2006 to 2009, said the there was a lot younger generations could learn from those who lived through the Second World War.

“There was huge commitment and service and a determination to see things through, to see the job done,” he said.

“And I think we can learn from that spirit. And we can apply that spirit to what’s going on fighting this awful coronavirus at the present moment.

“I think we see that spirit on the front line in the NHS, the present moment, we see the spirit in communities up and down the country.”

He encouraged the public to support the Tommy initiative in the days leading up to May 8, comparing it to the national weekly applause for NHS staff during the Covid-19 pandemic.

He added: “One will reflect on…. the commitment of the previous generation by glancing at those Tommys on May 8 and thinking, ‘yes, they did a good job all those years ago’.”

A team of injured veterans and people with disabilities working in the RBLI’s social enterprise,  Britain’s Bravest Manufacturing Company (BBMC) in Aylesford, Kent, have produced the VE Day 75 Tommy figures and window stickers.

Many in the factory’s workforce have been deemed essential workers during the coronavirus crisis and have been producing pallets to support the transport of food, pharmaceuticals and ventilators, as well as signage for national infrastructure projects.

The RBLI’s Aylesford Village also provides homes to more than 300 veterans and their families, many of whom have suffered from physical and mental conditions as a result of their military service.