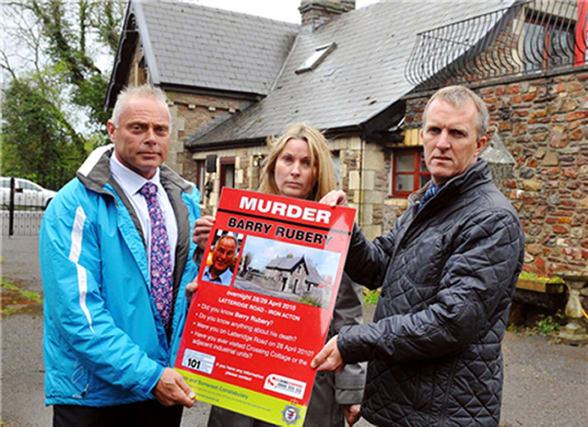 Detectives are urging anyone with information about the unsolved murder of a pensioner to come forward on what is the 10th anniversary of his death.

Retired farm labourer Barry Rubery, 68, was beaten to death on the evening of April 28, 2010 after returning to his home after a night out.

Mr Rubery was found heavily bloodstained and lying face down in the conservatory the following morning by a friend.

His ankles and wrists had been bound together with electrical flex and cable ties.

There were signs of a struggle outside and evidence that Mr Rubery had been dragged from his garden into his home, Crossing Cottage, in Iron Acton, South Gloucestershire.

Mr Rubery suffered fatal head injuries after returning from a dinner at a masonic lodge in Bristol the evening before he was found.

Police believe the attackers might have been lying in wait because the grandfather-of-six never made it into his home.

His briefcase, which he had taken with him to the dinner, was found on his garden path and Mr Rubery was still wearing his black suit.

There were signs that drawers and cupboards had been rummaged through and a gold masonic pocket watch, an old Makita drill, keys, a Nokia 3310 mobile phone and an extension lead had been taken.

However, Mr Rubery’s pocket watch and £130 he had on him were not taken, and there was no evidence that a safe in his home had been tampered with.

Despite an extensive investigation, several public appeals, including one on BBC Crimewatch, and two arrests, nobody has been charged with his murder.

Police are now appealing for anyone who knows who was involved in Mr Rubery’s death, or saw anything suspicious around his home in the days and weeks before he died, to get in touch.

Senior Investigating Officer Andy Mott said: “All our thoughts and sympathies are with Barry’s family on this significant anniversary and I’ve reassured them that he hasn’t been forgotten and we’re as determined as ever to identify his killer, or killers, and bring them to justice.

“There will be people out there who know who was responsible for Barry’s murder and I‘d urge them to come forward, for the sake of his family, to tell us what they know.

“The passage of time may allow you to speak up now when you couldn’t before. Please take this opportunity and do the right thing.”