PM ‘focused on PPE’ in first Cabinet after return to work 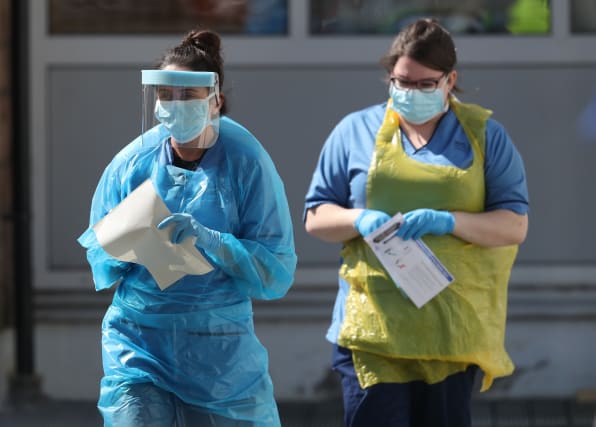 Securing more personal protective equipment was top of the agenda for the Prime Minister as he returned to work, his spokesman said.

The Government is facing considerable criticism over shortages of the equipment needed to keep staff safe on the frontline as they care for Covid-19 patients.

Downing Street said that Boris Johnson used his first meeting of the Covid-19 war Cabinet since his recovery from coronavirus to focus on the need to secure PPE supplies.

It comes after the nation fell silent for a minute on Tuesday morning to remember key workers who have lost their lives after being diagnosed with Covid-19.

And the death toll among frontline health and care workers surpassed 100, according to figures from the PA news agency.

The Prime Minister’s official spokesman said that PPE was the issue he focused on at the meeting on Monday morning.

The Government defended its record on PPE, following a critical BBC Panorama investigation, with the PM’s spokesman saying “we have been working to secure gowns and other PPE from across the globe – and domestically – for a number of months”.

Some 12 million items of PPE were delivered on Monday to 227 trusts and care settings, including gloves, aprons, three different types of masks, eye protectors and gowns.

Earlier Sir Keir Starmer said “too many” frontline workers have died during the fight against coronavirus “and we owe them a huge debt”.

In a video message, the Labour leader said: “Nobody should put their lives at risk because they haven’t got the right protective equipment.

“We owe it to them to make sure that we’ve got the right equipment, in the right place at the right time, and we will continue to press on that.”

Meanwhile, Matt Hancock was urged to issue a public apology over PPE shortages by the son of a doctor who died after warning the Government about a lack of the equipment.

Intisar Chowdhury, the son of Dr Abdul Mabud Chowdhury, who died earlier this month after being diagnosed with Covid-19, challenged the Health Secretary during a live phone in on LBC.

Five days before he was admitted to hospital, Dr Chowdhury, 53, wrote a Facebook post asking Mr Johnson to urgently provide every NHS worker with PPE.

“We took very, very seriously what your father said and we’ve been working around the clock to ensure that there’s enough protective equipment and in the case of anybody who works in the NHS or in social care and has died from coronavirus we look into it in each case to find out the reasons where they might have caught it and what lessons we can learn,” Mr Hancock said.

Mr Hancock said the Government has distributed more than a billion items of PPE.

Mr Hancock was asked by host Nick Ferrari whether he accepted that mistakes were made in the provision of PPE.

He replied: “Well, there are things that we’ve changed as we’ve gone through, both because we’ve learnt more things about the virus, also because things didn’t work out as we expected.”