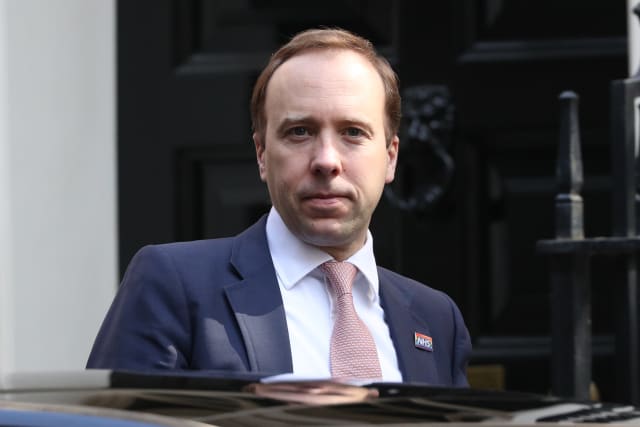 Parents have been warned to be on their guard as experts investigate a rare but serious syndrome affecting children, which may be caused by coronavirus.

Officials told the PA news agency fewer than 20 children in England have been admitted to hospital with the syndrome, which causes a toxic shock-style inflammatory reaction.

On Tuesday, Health Secretary Matt Hancock suggested some children had died, although it was unclear whether he meant deaths specifically relating to the syndrome.

Mr Hancock said experts were continuing to investigate the disease “with great urgency”.

He said: “It’s a fresh, new disease that we think may be caused by coronavirus and the Covid-19 virus. We’re not 100% sure because some of the people who got it hadn’t tested positive.

“We’re doing a lot of research now but it is something we’re worried about.

“What I would also stress is that it is rare. Although it is very significant for those children who do get it, the number of cases is small.”

It follows an alert shared with NHS trusts and GP groups by NHS England asking medics to remain on high alert for signs of the disease.

Mr Hancock told LBC: “We put out at the weekend a call across the NHS because some cases of this had been identified, and then this call essentially says to doctors in other parts of the country, ‘have you seen this condition?’, and then they collate the information and find out what’s going on.”

On Monday, NHS England’s national medical director Professor Stephen Powis said it was “too early to say” whether there was a link to coronavirus, while chief medical officer Professor Chris Whitty said it was “entirely plausible”.

Prof Powis urged parents who are worried about a child who is sick and not recovering to seek medical help.

The condition is said to be similar to Kawasaki disease, which mainly affects children under the age of five, with symptoms including a high temperature for five days or more, rashes and swollen glands in the neck.

On ITV’s This Morning on Tuesday, Ranj Singh, a TV medic and children’s doctor at London’s St George’s and St Thomas’ hospitals, said: “On the surface, this alert would seem quite scary, but we’ve got to put it into perspective.

“What we’ve seen over the last few weeks is a number of children that have been admitted to hospital, some of which have ended up in intensive care with a certain pattern of illness, which is a little bit worrying.

“Now what we’ve seen is these children have had a hyperinflammatory syndrome where they have lots and lots of inflammation around the body. And some of their symptoms that they’re coming in with are similar to another condition we already see in small children called Kawasaki disease.

“Now Kawasaki disease is a relatively poorly understood disease at the moment. We don’t know what causes it but it can make you quite unwell, and if it isn’t treated properly you can have long-term problems with your heart.”

Dr Ranj said it was not yet known if Covid-19 was to blame, adding: “We don’t know if it’s definitely related to Kawasaki disease or whether we’re dealing with something else entirely, which is why at the moment we are still learning a lot about it and we’re asking people to be extra careful.

“The advice for parents, carers and their children has not changed and I would just reiterate that one of the most common features of this inflammatory syndrome that we’re seeing, and also Kawasaki disease, is a persistent unremitting fever.”

He said symptoms could include a child becoming increasingly unwell, with a temperature that persists after five days, a rash, cracked red skin, and a swollen tongue, mouth, fingers and toes.

Dr Ranj said medics were “definitely seeing it in school-age children in this country”, adding that other nations including Spain had reported cases.

“That makes us think that this could potentially be related to coronavirus, but again it doesn’t prove it. We need more information.

“Or it could be that we’ve got a completely new agent emerging altogether. We just don’t know. Children are still at the lowest risk of coronavirus from everyone.”

Joe Brierley, a consultant in paediatric and neonatal intensive care at Great Ormond Street Hospital in London, told Channel 4 News on Monday that the syndrome was making those affected very sick but it was unclear if it was related to Covid-19.

“The timing is very suggestive, and we do know that some of the toxic shock syndrome-type things do follow other infections,” he added.

“We don’t have all the facts yet, and that’s why we’re very keen for children’s doctors… people who might be looking after children with quite bad tummy pain, diarrhoea and and the signs of septic shock to consider this diagnosis.”