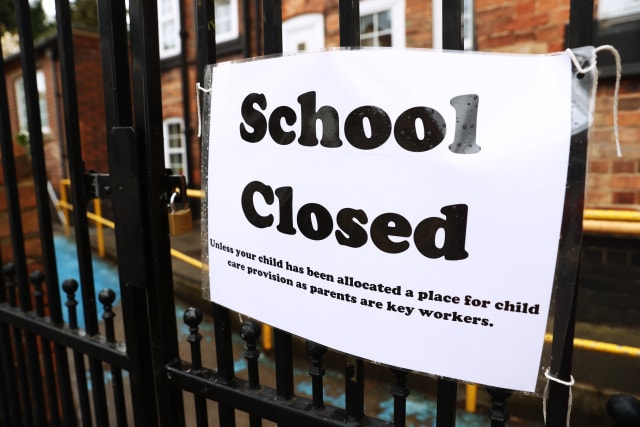 The proportion of vulnerable children attending schools and colleges during the Covid-19 pandemic has doubled amid concerns that these pupils were missing out on vital support.

Of the children in school on Friday last week, 49,000 were classed as vulnerable.

This was up from 24,000 on April 17, the last day of the Easter break for many schools, official figures show.

This represents around 10% of all children with a social worker or an education, health and care plan (EHCP) in England, according to the Government’s analysis.

The figures come after unions, charities and MPs raised concerns about the low numbers of vulnerable children taking up emergency school places.

Schools and colleges closed their doors to the majority of pupils, apart from the children of key workers and vulnerable youngsters, from March 23.

The latest Government figures show that the pupil attendance rate in education settings rose to 1.6% on Friday, the week after the Easter break, up from 0.9% the week before.

Education unions have suggested that the end of the Easter holidays, as well as increased efforts by schools and authorities to reach out to vulnerable families, could be behind the rise.

Attendance was higher last week than during the preceding three weeks during the lockdown.

But the rate is still lower than the first day of partial school closures, when 3.7% of pupils attended.

Anne Longfield, the Children’s Commissioner for England, welcomed the rise in vulnerable children attending school, but she said more can still be done to boost the numbers receiving support.

She said: “The doubling in number is testament to the hard work going on locally. I want to see these numbers continue to climb sharply.

“Even with this increase, only one in 10 vulnerable children are in school, so there is still much more to do.”

Geoff Barton, general secretary of the Association of School and College Leaders, said they expected to see an increase in pupil numbers at the start of the summer term after attendance fell during the Easter holidays – despite schools and colleges still being open.

He added: “Schools have been doing everything possible to reach out to vulnerable children and families to encourage them to take up places where this is the best option for them.”

Mary Bousted, joint general secretary of the National Education Union (NEU), said: “Some vulnerable children are home because of transport issues or their parent is self-isolating and has an underlying condition, or because their parent wants to keep them safe.

“We’ve got to recognise just how hard head teachers and safeguarding teams are working to stay in touch and keep positive connections going.

“Many heads are reminding parents about the offer of bringing their child in part-time, and that’s also boosted the numbers learning on-site.”

But Dr Bousted added: “The NEU thinks every child who can safely be at home should be.

“It is far too soon to risk increasing the rate of transmission and putting more pressure on the NHS. Testing and ongoing PPE shortages are a clear reminder of that.”