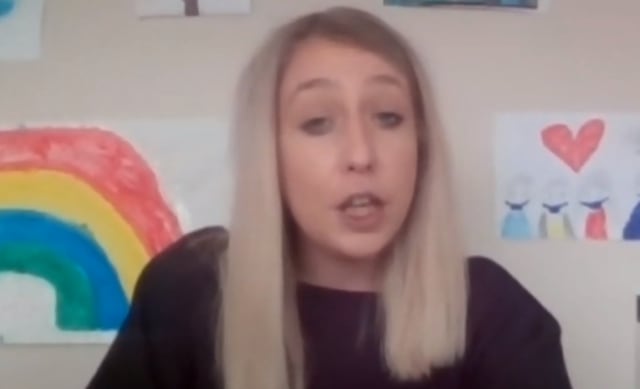 The youngest Conservative MP has vowed to be a “bloody difficult woman” as she became the first to make a maiden speech outside the Commons.

Deputy Speaker Nigel Evans declared it was “history in the making” as Sara Britcliffe appeared on television screens in the chamber to speak from her constituency in Lancashire.

Ms Britcliffe, MP for Hyndburn since December, recalled her mother’s death and outlined her mission to boost funding for the north, in which she vowed to adopt a “no-nonsense” approach.

She told the chamber: “I always said I got into politics to serve the community that I love and have lived in all of my life.

“And I always said I’d somehow redefine what it meant to be a constituency MP, so along with making history as the first female MP for the area, and the youngest Conservative MP in the country, I’m the first Member of Parliament ever to make their maiden speech remotely from their own home.

“I do this as I wanted to stay here, rooted into my community, to rise to the challenges we face because, I’ve always said, we’re stronger together.”

MPs are required to make a maiden speech after they are elected, in which they speak about their constituency and what they hope to achieve.

But given a maximum of only 50 MPs are allowed in the chamber under social distancing rules put in place in response to the coronavirus pandemic, Ms Britcliffe was among those contributing via Zoom.

The 25-year-old, explaining her mother’s death from the “devastating effects of alcohol” and mental health issues, said: “I lost my mum when I was nine years old.

“I witnessed a woman that I and many adored crumble before my eyes and a father having to pick up the pieces.

“Sadly my family’s experience is not an isolated case and that’s why it’s so important the right support is available, something I’ll be campaigning hard for as an MP.”

Ms Britcliffe added her main aim is to boost funding for the north, telling MPs it cannot just be a “one-off response” to an election result.

She also said: “We northerners pride ourselves in our no-nonsense, straight-talking approach so I apologise in advance to ministers.”

Ms Britcliffe said she will be pestering ministers for investment to help the northern economy thrive, joking: “To do this I’ll have to follow the long and proud Conservative tradition of being, in Ken Clarke’s words, a bloody difficult woman.

“But first we have to beat this virus.”

She noted her father Peter is staying at home in isolation as he celebrates his 70th birthday.