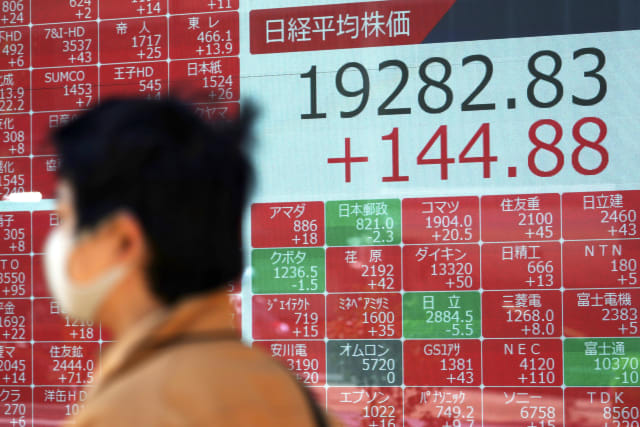 Traders continued to let their nerves relax a little, as longed-for hopes of a lockdown lift and a return to normality helped send shares higher.

David Madden, market analyst at CMC Markets, said: “There is a growing sense of optimism the lockdowns have helped contain Covid-19, and a loosening of restrictions seems to be on the horizon.

“A number of countries have already reopened some small aspects of their economies, and there is hope the trends will continue.

“Sadly the pandemic is still spreading, but it would appear the growth rate has cooled, so dealers have another reason to be bullish.”

That hope was reflected by positive noises from several companies, including McDonald’s and Wagamama, who both announced plans to offer takeaway services again.

In the US, however, stock markets started Tuesday down, with investors worried ahead of results out from Google’s owner Alphabet, Facebook and Microsoft over the next 24 hours.

In company news, BP shareholders were pleased to see new boss Bernard Looney reassure investors that he would pay out a dividend for the last quarter, even raising it by 0.25 US cents to 10.5 cents (8.5p) per share.

The payout will come despite the plummeting oil prices, and sent shares closing up 8.1p at 322.1p.

Marks & Spencer announced plans for a “never the same again” overhaul after coronavirus as it warned trading is set to be affected for the whole of 2020. Shares at M&S closed up 3.1p at 97.46p.

But changes in the building world continue to hit supplies group Travis Perkins, which said revenues fell by two-thirds in the first three weeks of April.

The falls were despite keeping sites such as Wickes and ToolStation operating during the coronavirus pandemic. Shares closed up 46p at 1,066p.