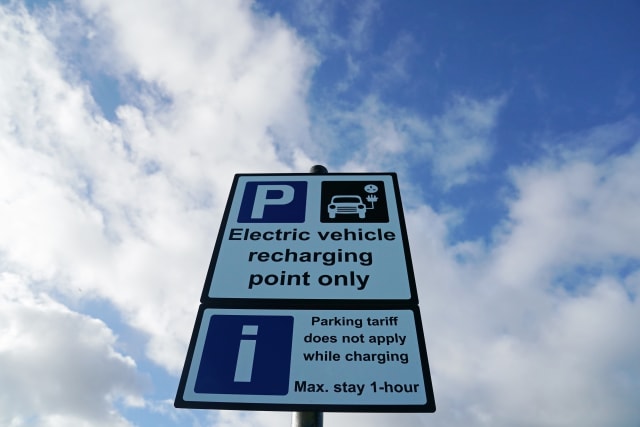 More than four out of five drivers believe signs for electric vehicle (EV) charge points would be easier to spot if they were green, a new survey suggests.

Some 85% of 17,500 drivers polled by the AA said signs featuring a white “P” in a green box would have “more impact” in indicating the location of charge points.

This would be instead of a blue box, which is the colour used on designs currently approved by the Department for Transport.

AA head of roads policy Jack Cousens said transforming charge point signage in this “simple” way could make a “big difference” to demand for electric cars by easing concerns over the extent of the charging infrastructure.

He went on: “Drivers believe there are a lack of charging points, but the case is they are hidden in plain sight. While fuel forecourts have the benefit of large totem poles, charge points can blend into the background.

“Changing to a green parking sign will help them stand out and reassure drivers who are thinking about buying an EV that there are more charge points than they think.”

Mr Cousens added that giving the signs a splash of green to make them distinctive from regular parking signs could reduce the number of drivers who accidentally park in charging bays, stopping EV drivers from topping up their batteries.

The motoring research charity said this shows they are “not just trophy vehicles”.

Transport Secretary Grant Shapps has said the ban on sales of new petrol, diesel and hybrid cars and vans could be brought forward from 2040 to as early as 2032 in a bid to meet carbon-reduction targets.