Easing of restrictions in Northern Ireland not imminent, says Swann 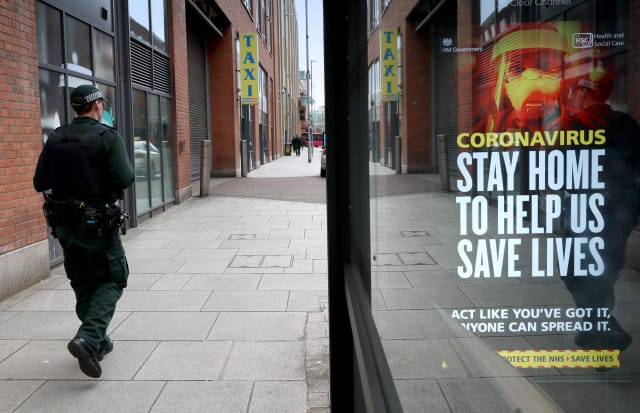 The easing of coronavirus restrictions in Northern Ireland is not imminent, Stormont’s health minister has warned.

Robin Swann said the fact that the death toll recorded in the last five weeks is higher than during the worst of the Troubles shows “how serious this is”.

Chief medical officer Michael McBride said the region is through the peak of the first wave of Covid-19 but any sudden relaxation of the lockdown could see cases surge again.

The 20 deaths announced in the region on Tuesday was the largest single daily toll since the outbreak began.

There have been 329 deaths recorded by hospital trusts to date in Northern Ireland, but the overall total is expected to be significantly larger when deaths in nursing homes and in the community are factored in.

There have been 3,408 confirmed cases of Covid-19 in the region.

Mr Swann commended the majority of people for abiding by social distancing measures but expressed concern at the “selfish” actions of a minority flouting the rules.

“Don’t let anyone say this has all been overblown because, believe me, it hasn’t,” he told the daily Covid-19 briefing at Stormont.

“There is a risk that the important work done to save lives could lead to complacency in some quarters.”

He said the spread of the disease had not been as devastating as initially predicted because warnings had been heeded and people had complied with Government advice.

“The mounting death toll is already on a scale not seen during the worst of the Troubles, that’s how serious this is,” he added.

“I would reassure those listening that a time will come when we will be able to ease some of the restrictions, but that time is not now.

“I know the public will forgive me for being cautious about that, I don’t want to start speculating on potential dates because we haven’t reached that stage yet, I don’t want people thinking or acting like it is imminent, because it is not.”

Mr Swann said that when the time comes to ease social distancing, it will “not be like flicking a switch on going back to the old ways”.

“Social distancing will be with us in some form for many months,” he said.

“Am I concerned about a relaxation and a selfishness in regards to some of the members of the community of Northern Ireland? Yes.”

Dr McBride said the reproductive rate of the disease – the average number of people an infected person infects – is now between 0.7 and 0.8, having been 2.8 at the outset of the outbreak.

He urged people not to compare the region with other places around the world that are taking steps to relax restrictions.

“We are not all in the same place and that is crucially important for us all to remember,” he said.

“It is too soon, it is too early for us now to lose the ground we have made.

“My concern as chief medical officer is we don’t basically lose our way after all the gains that we have made and think that somehow or other we are through the worst of this.

“We may be through the peak, and indeed are, of this wave but we could very quickly end up where we were a few short weeks ago if our response as a public begins to unravel at this time.”