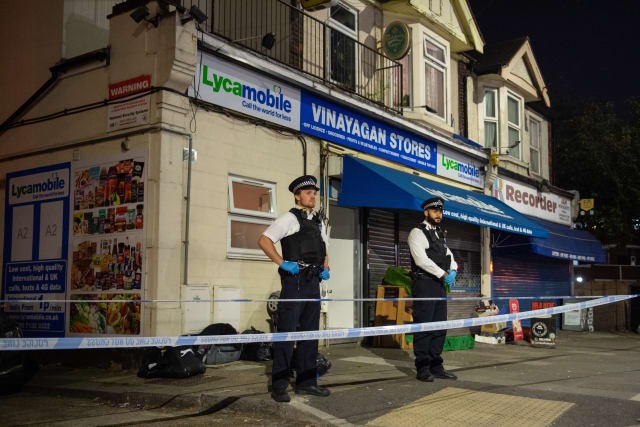 Two young children who were stabbed to death in an attack at their east London home have been named by police.

Police and the air ambulance were called to an address in Aldborough Road North at around 5.30pm to reports of a man and two children being injured.

Pavinya was pronounced dead at the scene and Nigish was taken to hospital by the London Ambulance Service but died after arrival.

A 40-year-old man who also suffered a knife injury was taken to hospital where he is in a critical condition.

Officers remain in attendance at the hospital.

Police said all those involved in the incident were known to each other, with the children’s mother being supported by specially trained officers.

No arrests have been made, but police are currently not looking for anyone else in connection with the incident.

Reporters were previously told that a newsagent worker named locally as Nithin Kumar, known as Nithi, lived at the property with his wife Nisa and two young children.

His boss Shanmugathas Thevadurai told reporters at the CVS store about two miles from the scene that Mr Kumar had been at work on Sunday, finishing at around 4pm.

Mr Thevadurai, 54, said he hired Mr Kumar eight years ago after he lost his job at Tesco, and called him a “hard-working, honest person” who had a “shy” disposition but was “very polite and friendly with customers”.

A mother-of-two who lives across the road from where the incident took place, who gave her name as Reshna, said the attack as “devastating” and “horrific”, and described hearing a woman screaming for help “like she was being tortured”.

Several neighbours said the family were of Sri Lankan descent.

Detective Chief Inspector Vicky Tunstall, of the Metropolitan Police, said: “The ending of these innocent young lives is extraordinarily tragic and we are working hard to fully understand what may have caused this to happen.

“Whilst I know the effects of this crime are reverberating throughout the local community, please be reassured that we are not seeking any other persons in connection with the deaths and there is no cause for the community to be fearful or alarmed.

“I would like to hear from anyone who feels they may have information that could assist our investigation to understand this horrific tragedy.”