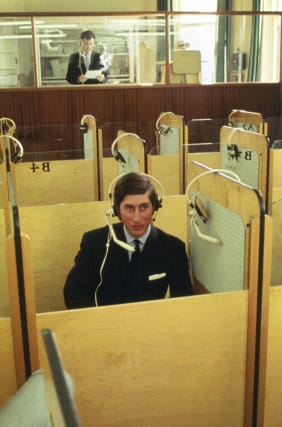 The Prince of Wales has paid tribute to his former Welsh tutor, Tedi Millward, for helping to foster his “deep and abiding love for Wales, her people and her culture”.

Dr Millward, who has died at the age of 89, taught at Aberystwyth University and tutored Charles in Welsh ahead of his investiture as the Prince of Wales in 1969.

Charles said he was deeply saddened to hear of his death and had fond memories of their time together.

Dr Millward, an inspirational figure for the Welsh nationalism movement, was hailed as a driven campaigner for Welsh culture, identity and independence, with Plaid Cymru describing him as a “Welsh giant”.

The prince said: “I am deeply saddened to hear of Dr Millward’s death.

“I have very fond memories of my time in Aberystwyth with Dr Millward over 51 years ago.

“While I am afraid I might not have been the best student, I learned an immense amount from him about the Welsh language and about the history of Wales.

“After all these years, I am forever grateful to him for helping foster my deep and abiding love for Wales, her people and her culture.

“I send my most heartfelt sympathy to his family.”

The pair’s lessons featured in an episode of Netflix series The Crown, titled Tywysog Cymru – Welsh for Prince of Wales.

Born in Cardiff in 1930, Dr Millward co-founded the Welsh Language Society, which is credited with helping establish Welsh as an official legal language in 1967.

He was also a prominent member of Plaid Cymru, running unsuccessfully for the seat of Cardiganshire in a Westminster election.

His daughter, London-based singer and actress Llio Millward, said she thought of her father as a nationalist first.

“My beloved father was a deeply principled man who dedicated his life and his life’s work to Wales,” she posted on Facebook.

“He was a man of the highest integrity and a true gentleman in every sense.

“Although in personality he was very self-effacing and modest, he achieved phenomenal heights and lived his whole life with great purpose and passion for Wales, the Welsh language and the people of Wales.”

In one of his final interviews late last year, Dr Millward said he had been opposed to Charles becoming Prince of Wales but that the pair developed a warm relationship.

“I wasn’t in favour of him ­becoming Prince of Wales. And he knew it,” Dr Millward told the Sun.

“(But) in the end, I got on quite well with him and he was good to get to know.

“I found him intelligent and quite charming. We became quite close.”

Actor Mark Lewis Jones, who played Dr Millward in The Crown, said he had made an “immense” contribution to Wales.

“I had the absolute privilege to play this Welsh giant. His contribution to Wales and its language is immense. A great loss,” he tweeted.

Independence group YesCymru said Dr Millward was a symbol of “a brave generation” who had stood up for Welsh identity.

“It’s cos of Tedi Millward and others that @Cymdeithas (YesCymru) was formed – against a background of hatred towards them and the Welsh language by many Welsh people who thought Welsh was only for chapel and not the modern world.

“A brave generation who refused to lie down and see Welsh die,” the group tweeted.